BRINZAL: 30 YEARS WITH THE NOCTURNAL BIRDS OF PREY

In Birding140 we believe that the best way to celebrate Brinzal’s anniversary is to share with our readers the work and actions of this group of professionals who look after our nocturnal birds of prey.

It is a non-profit association which has been specialised in the recovery, conservation and study of the nocturnal birds of prey for over 30 years. All of this is achieved thanks to an interdisciplinary team comprised of veterinaries, biologists and naturalists, together with a large group of volunteers which selflessly offer their time.

At the same time, they carry out environmental education work, conservation projects, educational and investigation tasks and courses and activities related to these birds.

As a fun fact, we should know that brinzal in Spanish means a plant, or even a whole forest, which comes from a seed. In allusion to this, it is interesting to notice the unity and commitment necessary to carry this work forward. Hence the importance of Brinzal’s collaborators, followers and volunteers. All of them conform the “forest” that hosts the nocturnal birds of prey.

Let’s now see how the curious Brinzal hospital works. When the birds are admitted, they undergo a complete veterinary examination in order to evaluate the extent of their injuries. This usually includes a haematology, a parasitological test and radiographies.

The next step is the start of the treatment, which can include antibiotics, bandages or even surgery in extreme cases. After the veterinary recovery, the specimens stay in facilities that replicate the conditions of nature until they regain physical fitness.

If everything goes well, the process finishes with the release of the patient into the wild. Sometimes, however, this is not possible, despite all the effort. The incurable specimens are then kept in the centre: they become adoptive parents, take part in different programs of captive breeding or act as blood donors for other patients.

The centre is located in the middle of the Casa de Campo park in Madrid, although it can’t be visited. It is actually impractical to bother the birds which are recovering from their injuries in order to be released, because stress affects them badly. But through their website we can take a virtual visit around the facilities.

Come now with us to see the steps and rooms the arriving patients go through. The first area we find is Admissions. Everything starts here, when someone like you brings in a nocturnal bird of prey in need for help.

After receiving the specimen and gathering the necessary information (like the place and circumstances in which it was found), the animal goes to the Hospitalisation Office, where they check the specimen and determine the appropriate treatment for it.

If necessary, as a leader centre they can offer physiotherapy, acupuncture or even feather grafting. Here we find the infirmary, where birds receive first aid, and also the Intensive Care Units, equipped to provide peace and care to the most delicate patients.

This unit is mostly frequented by birds with trauma: fractures, eye damage, serious injuries… Moreover, at the entrance of each area there is a footbath to prevent the spread of diseases through footwear. In one of the adjacent facilities, rats, mice, crickets and mealworms are reproduced in order to meet the dietary needs of their tenants.

We then go to the Rehabilitation Area, which is formed by facilities of different sizes, designed to accommodate several specimens. Here are distributed Scops Owls, Little Owls, Tawny Owls, Long-eared Owls, Eurasian Eagle-Owls, Barn Owls and Short-eared Owls, as well as associated species like nightjars… The enclosures are interconnected by corridors, they have cameras and are upholstered with mesh screens, which minimise stress, avoiding contact with humans as much as possible. The Little Owl is the species with the fastest and easiest recovery.

In some of these premises there are incurable specimens which act as wet nurses. This benefits the youngest patients, helps them recognise themselves as a species and contributes to their psychological development until it is appropriate to get back into the wild.

We should highlight the preparation methods for the release. It is important that the chicks of certain species which grow in captivity have the option to differentiate the hazards that will appear after their release. In the wild they receive this lesson from adults.

All around the enclosure there is a framework of cables and speakers which produces alert sounds when a possible predator “appears” (rats inside metal mesh cages on the ground and a stuffed diurnal bird of prey above), so the animals associate them with something dangerous. This awakens their genetically determined instincts to escape, hide or stay still in the presence of potential predators. 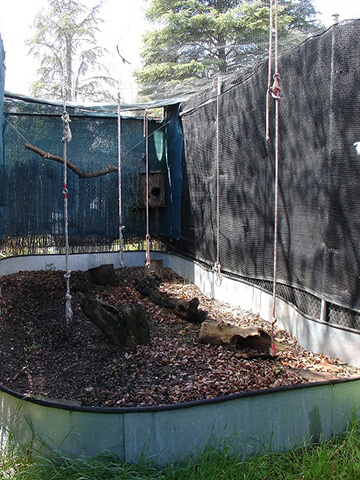 In this area there are also some training units. Linear flight cages are designed to gain strength during the flight and train live prey hunting. We can point out the facilities with obstacles in the form of rope hanging from the ceiling for forest species, while the impressive circular flight cage, with its ring-shaped design, allows for a continuous flight for a better strength building. The latter is mainly used for patients with fractures of difficult recovery. During the rehabilitation process, animals are continuously evaluated, because they must be able to fly and hunt properly before their release in order to be able to survive in the wild.

Lastly, the breeding area complements these facilities. In captivity breeding, humans only intervene in the most delicate phases: the last incubation phase, birth and the first days of the chicks, when they are manually raised.

From the moment they start opening their eyes and they start the process of recognition of their own species, the chicks are returned to their parents, who raise them in the most natural way possible. This prevents the hazard of wrong imprinting. Once they are grown, they are released into the wild to reinforce the natural populations wherever it is necessary.

After the recovery comes the release of the specimens, which can be carried out through different methods. The most common method is direct release, which depending on the species can be made releasing the specimen to the air or from a transport box. This occurs during the day, to reduce the stress of the situation and give the specimen more time to become familiar with the environment. This is an effective method for fit specimens which keep a hunting habit.

There is also hacking, which is useful for species with a long emancipation period, like owls. The chicks are set in nesting boxes, and daily food is provided through a pipe. The food supply is reduced when the specimens are able to hunt. This method employs a large amount of time and means, but provides them with certain independence in the place of the release.

The last method for the release of specimens is fostering. It consists on the introduction of chicks in family groups of natural nests. This technique requires a previous tracking of the nest and a close monitoring. It is important to know that it is possible to release one-eyed nocturnal birds of prey, but never those with auditory problems, because they wouldn’t be able to hunt.

After the release, the recovered specimens are monitored. Each released specimen bears a metal ring or a radio transmitter. The latter are placed in the tail or back of the bird, thus getting information through a receptor after the release.

The data from last year that Birding140 received from the recovery centre show the impressive work of Brinzal. The results encourage them to get better year by year, improving their techniques and protocols, as well as their facilities. No more and no less than 270 nocturnal birds of prey and nightjar specimens were released in 2015.

Among all the patients, we should point out the number of admissions of swifts and Scops Owls, especially during the month of July. The first, as a consequence of falls from the nest and failures in their initiation flights. The latter, because they are quite numerous in very humanized areas like parks and gardens; they even nest in the trees in the centre of Madrid.

For decades, the Scops Owl’s chicks in this city have been suffering a disease that provokes them serious injuries in the mouth, which prevents them from eating. For this reason, they can die if they are not treated on time. After the studies conducted throughout the years, it has been concluded that their diet in Madrid is largely based on cockroaches, an arthropod that transmits them the parasite which causes this disease.

When we study the causes for admission, we observe that collisions cause casualties specially in Barn Owls and Little Owls, because they use traffic signs as an ambush technique.

Power lines specially affect Eurasian Eagle-Owls: their wingspan plays a bad turn when it contacts a cable and a steel post at the same time. The “Great Duke” also loses when there are hunting accidents or mistakes. In 2003, a Eurasian Eagle-Owl specimen was admitted with 85 pellets in its body. The strength of these birds and the good work of Brinzal did the rest to release it when it recovered.

The use of rodenticides affects the diet of Barn Owls and Tawny Owls, because the bulk of their diet are rodents. Meanwhile, pesticides harm Little Owls and Scops Owls, which feed on insects.

Let’s not forget that every gesture counts, and we can contribute becoming owlunteers or members, buying merchandise or fostering a bird. We can also donate funds through their website, teaming, Facebook or free of charge through our online purchases through Help Freely (with this app we can donate part of our purchases without increasing the cost of the product).

Moreover, Brinzal provides us with some guidelines in case we find an injured bird, especially if it is a nocturnal bird of prey. In the first place, it is important to make sure that the bird needs our help. In the case of these birds of prey, young individuals abandon the nest very soon, even before they can fly.

In order to catch a bird, protect ourselves from its claws and block their sight, the best option is to through some piece of cloth over it. When transporting the patient, the most adequate is to use a cardboard box with small holes. Under no circumstance should we use a cage, because it would cause more stress to the specimen and its plumage could get damaged.

It is important to remember that it is better not to feed them or give them water, because we could damage their health. Moreover, in no case should we try to heal it: this task should only by carried out in a recovery centre. Lastly, we should contact the closest recovery centre. In Madrid, this would be Brinzal, phone number +34 91 479 45 65.

With this lines we hope we can bring this centre closer to people, as it is the only one specialised in this kind of birds, and the work of the professionals which make it possible. We should not forget the owlunteers, supporters and members, which stick up doing their bit. The final motivation is the wish that our nights will still have the presence of the mysterious and attracting nocturnal birds of prey. Finally, we want to thank Brinzal and its coordinator, Patricia Orejas, without whose help this post wouldn’t have been possible.