MONITORING OF THE COMMON CRANE IN EUROPE -5TH REPORT

Imagine you are somewhere in the Iberian Peninsula without a GPS, a map, or even a compass, and you need to find your way back to Scandinavia, thousands of kilometres away. How would you orient yourselves?

This is what Common Cranes go through at the end of each winter, when they have the compelling need to return to their breeding sites in the north of Europe. The fact that the large flocks of cranes know exactly how and when to return to their homes is one of the most fascinating mysteries of nature. How do they manage?

Today we are bringing you the new report of the collaborative project #birding140. The compilation of tweets goes from 10 December 2016 to 10 March 2017, three months that correspond to the winter of the cranes in the Iberian Peninsula and their return to the north at the beginning of March.

As in previous reports, we graphically indicate the sightings with a red dot on the map of Europe and highlight five places which are especially important for the cranes during their migration (Diepholzer Moorniederung, Lac du Der, Arjuzanx, Gallocanta and the region of Extremadura). Over these locations we place a green circle, of larger or smaller size according to the number of cranes gathered at the end of the period referred to in each map. 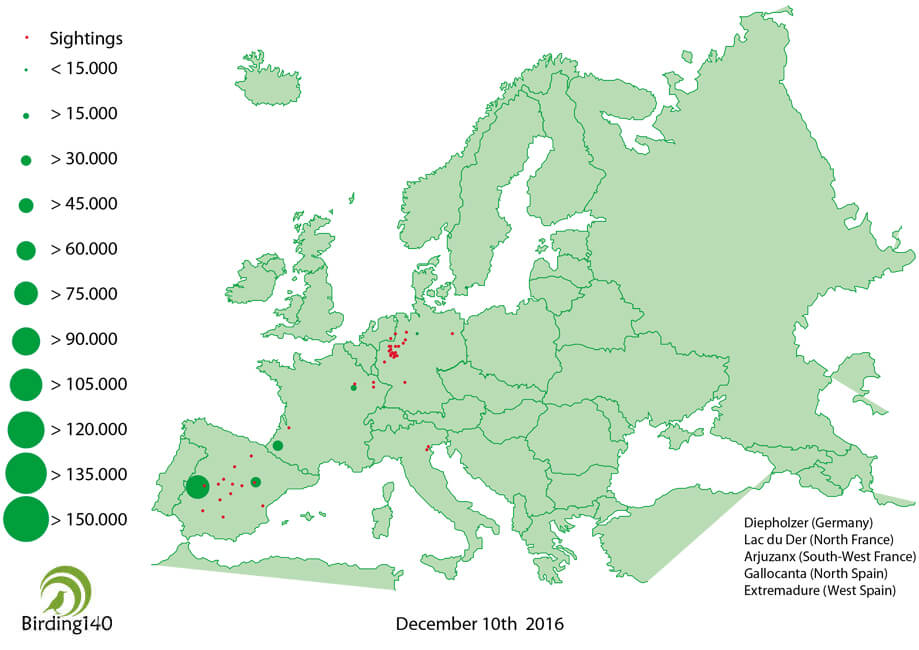 Sightings of migration of cranes in Europe until December 10th 2016

The first map reflects the situation as we left it on the previous report, on 10 December 2016. Most of the cranes that followed the western route on their migration to the south are scattered around the Iberian Peninsula. Approximately half of them chose the region of Extremadura as their wintering location.

We continue with the second map. It shows the sightings between 11 December and 10 January. As you can see, there seems to be no changes: the cranes spend the winter calmly, without any large movement. Although most of them have travelled to the Iberian Peninsula, some take the risk of spending the winter in Germany or France; apparently, every year more specimens decide to do this. 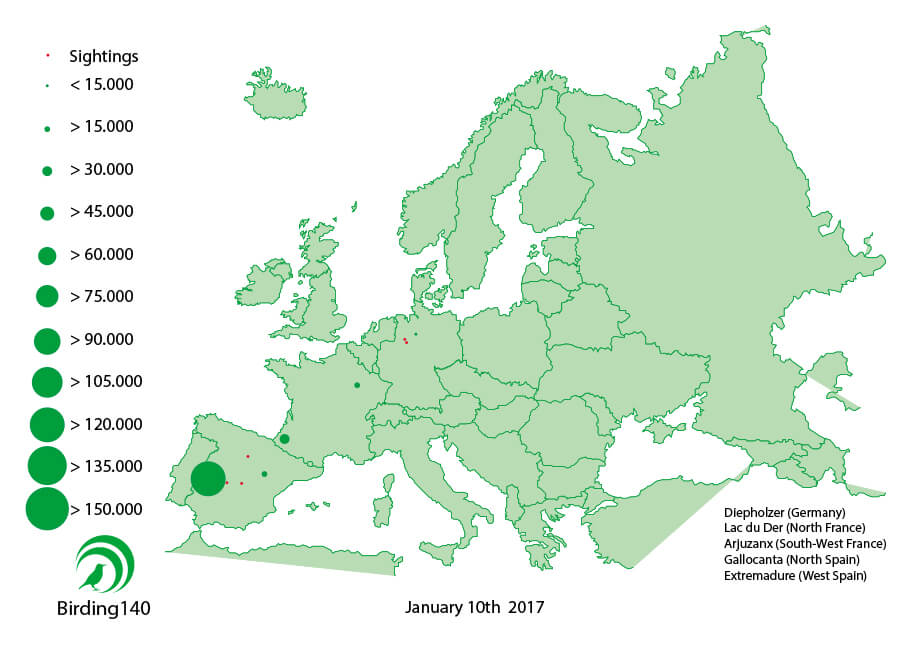 Sightings of migration of cranes in Europe until January 10th 2017

The situation is repeated in the following map, from 11 January to 10 February: we got few sightings and the situation is apparently calm. However, the cranes will soon have to return to the north of Europe. The birth of the new generation depends on that.

In just a few days, the cranes will face one of the most difficult orientation tests we can imagine. The strong Cierzo wind, the high peaks of the Pyrenees and the powerful Atlantic storms will try to divert their route. However, the Common Crane is a master of orientation.

Cranes use the information provided by geographical features, the sun, the night sky, the magnetic fields and even the winds to orient themselves. 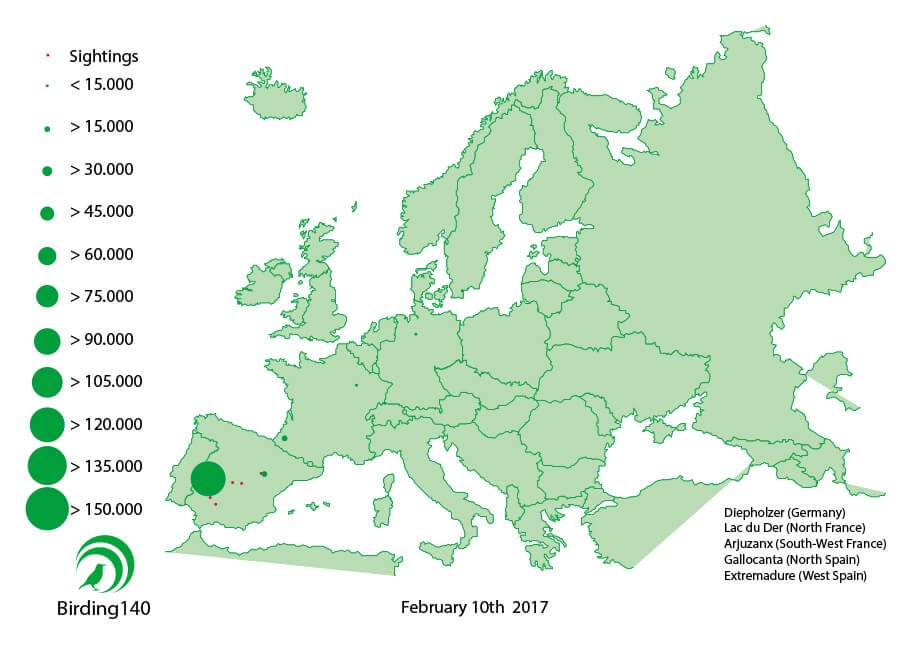 Sightings of migration of cranes in Europe until February 10th 2017

In the autumn, when the cranes travel with their chicks towards the south, it is easy to observe the way they use the course of the rivers and some terrain elevations as a reference. However, this visual navigation system is not enough when they travel during the night, or when they return to the north using much more straight routes towards their destination, far less when they take new routes flying over unknown places. They need a compass and a map.

Every morning, cranes observe the sunrise and the arch formed by the sun in the horizon until sunset. But that is not all: their small brain internalises the speed and the path of the sun, that is, through daily observation they are able to deduce the solar time and the position of the sun at each moment. Here we have a solar compass to calculate where the north is.

Crane migration to the north

It is 24 February afternoon in Madrid. Many people are packing to go away for the weekend. Everything seems normal, like every other Friday. Few of them happen to look at the sky, let alone listen to the noise of the city.

However, today is a special day. If you listened to the traffic noise, you would hear a noise that is different than usual, a trumpeting that invites to raise your eyes to the sky and see the show of thousands of cranes flying over the city. The migration to the north has begun.

In a couple of days, most of the cranes in the Iberian Peninsula are concentrated in a wide area around the lake of Gallocanta. To orient themselves they have used visual navigation, their solar compass and the rotation of the stars: three procedures that any trained human could also use. However, to face their challenge with success, they will also need to use “superhuman” orientation mechanisms. 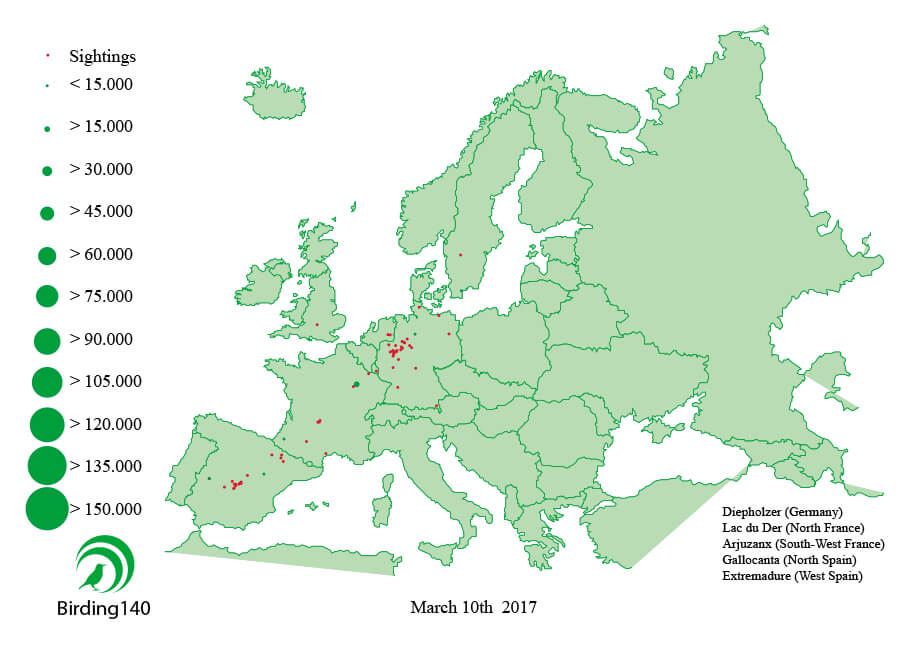 Sightings of migration of cranes in Europe until March 10th 2017

This year, the pause in Gallocanta will be short. At dawn on 27 February, the cranes are restless; the atmospheric pressure is changing, although humans cannot perceive it. The 100 km/hour Cierzo winds will soon arrive.

Tens of thousands of cranes rush their migration and try to cross the Ebro Valley in order to reach the Pyrenees. If they are surprised by the Cierzo wind in the valley, they will have to make a great flying effort and they could die of exhaustion trying to overcome the summits of the Pyrenees.

If they let themselves to be dragged by the Cierzo winds to the Mediterranean coast, they could reach France through the Catalan Pyrenees, with much lower summits. However, through this route they will arrive later than the other cranes to the breeding areas and they might not find free territories to build their nests.

The die is cast: on 27 and 28 February and 1 March, most of the crane flocks manage to overcome the Pyrenees and fly over France towards the north through a more eastern route than the one they used in the autumn in their migration to the south.

Time is tight for getting the best breeding territories. On 28 February the first crane arrives to Hornborga (Sweden).

Meanwhile, an Atlantic storm reaches France, slowing down the progress of the cranes that have overcome the Pyrenees through their central part. Most of them manage to reach the border with Belgium and Luxembourg on 4 March. On 10 March, most of the European cranes are already in their breeding sites in Scandinavia and the Baltic sea, or are about to arrive.

During their trip, many of them were forced to deviate from their route and enter unknown territories. How did they manage to get home?

The sixth sense of the cranes: the magnetic sense

Nowadays it is known that cranes and many other birds are somehow capable of sensing the intensity of the magnetic field of the Earth. Chicks learn the geomagnetic characteristics of their bird site. When their parents accompany them in their first migration, they sense how the intensity of the magnetic field varies evenly as they move forward to the south.

This capacity allows adult cranes to perceive at all times the latitude they are in, and to create a mental map with the places they know and they distance they are from those places. Adult cranes always know where they are and in which direction they should fly in order to return home, even when a huge storm deviates them hundreds or thousands of kilometres from their route toward unknown territories.

We want to thank all of you for these almost three years of the collaborative experiment #birding140. A big thank you for all of your tweets, without which the migration maps would not be possible. THANK YOU!