At the beginning of November we encouraged you to take part in a cooperative project to follow the migratory flows of the Common Crane in Europe. We asked you to share your sightings through Twitter indicating the place, date and time of the sighting, as well as the approximate number of cranes in the flock.

Today, two months after the experiment began, we are feeling overwhelmed by the large number of people who wanted to collaborate. Almost a hundred friends from Germany, the Netherlands, France and Spain have shared their sightings and comments. Now it is our turn to show the first results.

We have chosen to display the data graphically with maps to make it easily interpretable. Each sighting is shown as a red spot on the map of Europe. We have also located five places that are especially important to the cranes during their migration, and placed a green spot on each of them. The size of the spot depends on the concentration of cranes in the place at the end of the period referred to in the map. The five places we have chosen are: Diepholzer Moorniederung, Lac du Der, Arjuzanx, Gallocanta and the region of Extremadura.

Here is the first map. It reflects the situation in Europe on 10 November 2014. There aren’t any red spots yet because the experiment has just started, but if we take a look at the north of France we can find an exceptional situation. 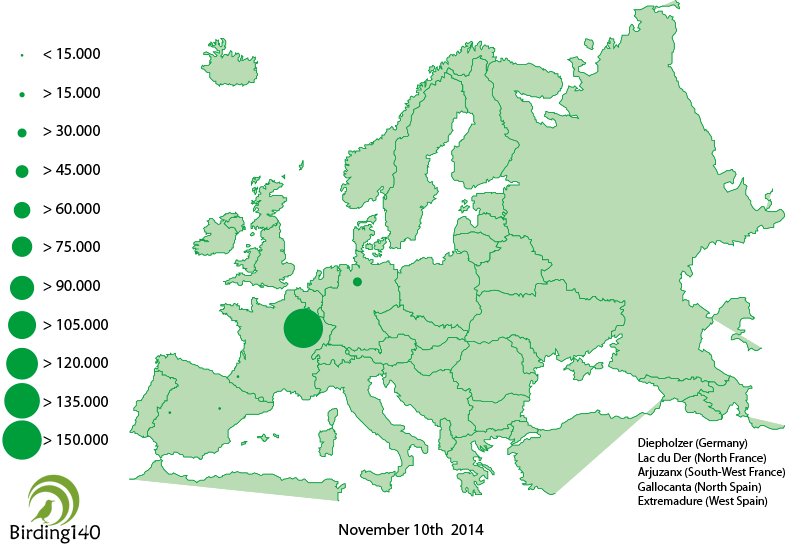 Map of the main places of concentration of cranes in Europe on November 10, 2014

The weather in Europe has been unusually kind during the whole month of October and the first days of November. This has made the cranes become lazy and migrate really slowly to the south. Those arriving to Lac du Der from Germany join the ones that arrived weeks ago and that are still on the lake. On 11 November a new register is carried out and – surprise! Nothing less than 206,582 cranes, the largest concentration ever registered in Europe.

We continue with the second map. It shows the situation of the five reference places on 10 December. It also includes the sightings shared between 10 November and 11 December as little red dots on the maps. An important number of cranes is still in Lac du Dec. Most of them, however, have crossed the Pyrenees through the west side and are already in the Iberian Peninsula. 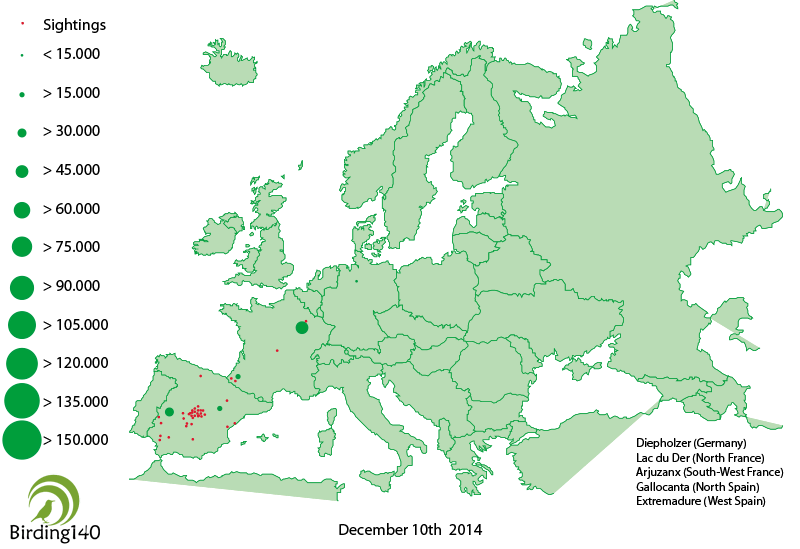 Map of evolution of migratory path of the cranes in Europe and sightings on December 10, 2014

If we analyse the map a bit further, we can see how the sightings clearly state a migratory route towards Extremadura that overflies the city of Madrid. On 19 November in particular, the capital of Spain was a real crane city.

We have also received some sightings on the Mediterranean coast, adventurers looking for new routes and wintering territories? Small groups that just diverted their route? It looks like the latter, but who knows?

The last map shows the sightings between 11 December and 10 January, as well as the crane concentrations in our five reference places at the beginning of 2015. We can see how the cranes have occupied the centre and the south of the Iberian Peninsula, specially concentrating in the region of Extremadura. They will stay there for weeks before starting the return trip to their breeding sites in the north of Europe. 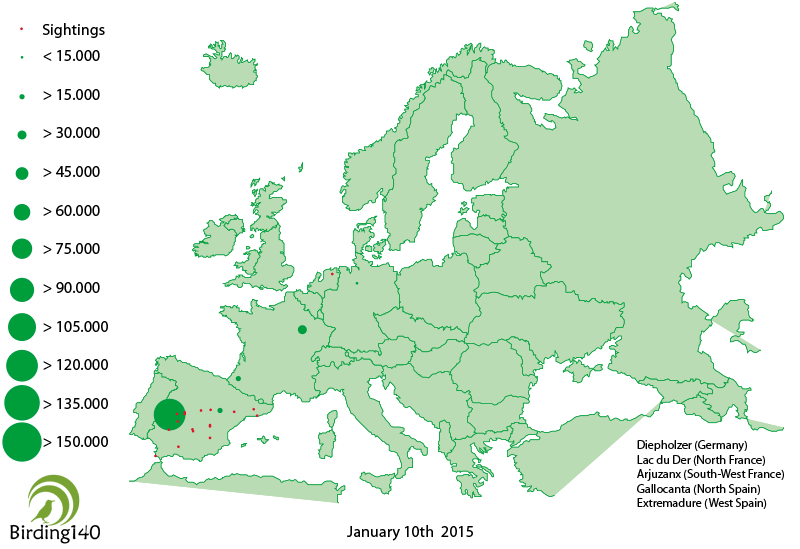 Map of evolution of migratory path of the cranes in Europe and sightings on January 10, 2015

We don’t want to finish this summary without saying thanks to you all. We never thought a small cooperative experiment like the one we proposed would have such a good reception. We will continue collecting all the sightings we receive during the next months and we will create new maps. At the end of this report there is a compilation of many of the sightings that have come to us through Twitter.