In November 2013 a new birding blog was born. With enthusiasm and dedication to this blogging adventure, we have tried since then to inform and entertain everyone who gave us the opportunity of filling their screen. During this time we have learnt a lot about birds and we have tried to transmit it to our readers.

On the occasion of our first anniversary we wanted to boost some projects that had been left to the side due to lack of time. One of them, maybe the one we were fondest of, was the idea of organizing a meet-up.

We finally decided to carry it out, and we chose an exceptional event that went almost unnoticed. It was the migratory stopover of the cranes in Madrid. Every year, thousands of cranes fly over the city with hardly anyone raising their sight to see them.

We set November 2 as the day for the meet-up, and we summoned everyone who wanted to join us in the Plaza de Oriente. A small group of birding friends gathered there and we started our walk to spot cranes.

A Grey Heron over flying the Royal Palace of Madrid

From Plaza de Oriente, we headed towards the Manzanares River. During our tour, we could watch mallards, egrets, cormorants, a couple of Grey Herons, Monk Parakeets “invading everything”, and many, many gulls. However, the best thing for us was getting to talk to such nice people. Thank you very much for your attendance! We hope we will meet again soon.

A Great Cormorant spreading its wings in Madrid Rio

And what about the cranes?

We had to wait a long time for them, but at the end of the meeting, when we were almost thinking it was impossible to see them, they surprised us flying over the Vicente Calderón stadium.

As we said. Thanks a lot to all of you. Although we don’t have other meet-ups scheduled at the moment, during this month we will announce some projects you can be part of. The first one is our little cooperative experiment #Birding140. It consists in following the migration of the cranes through Twitter and the hashtag #Birding140. We explain how it works in the following sign: 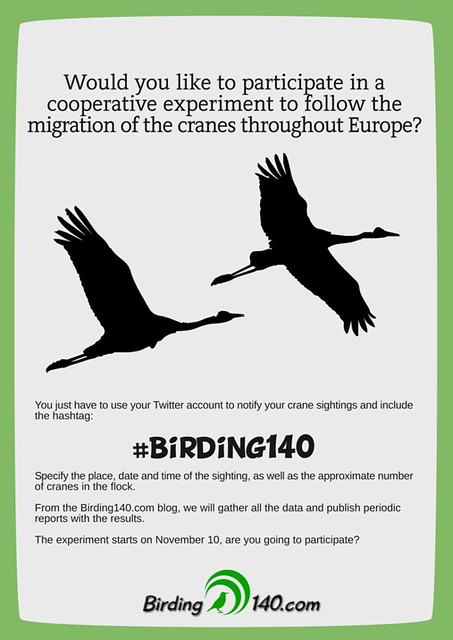 Cooperative experiment #Birding140 Cartel – When you see a crane, tweet it!