EURASIAN EAGLE-OWL: THE DENSEST POPULATION IN EUROPE IS BEING GUARDED BY ASE

The SPA Sierra de Escalona y Dehesa de Campoamor is located on the south of the province of Alicante. This settlement, which receives the influence of the Mediterranean, is a real paradise for both diurnal and nocturnal birds of prey. It is an essential place for the dispersion of Bonelli’s Eagle and Golden Eagle juveniles. But it was undoubtedly the Eurasian Eagle-Owl population what caught our attention.

Here, the Eurasian Eagle-Owl keeps the densest population in Europe, becoming one of the largest and best preserved populations of the “Great Duke” at a global level, with about 80 registered couples. Even during the worst years, the number of couples was never below 50.

Owls find so many problems when nesting that they get to nest in abandoned lairs, or even on the floor with no protection at all. This is starting to become unique due to the number of locations of this kind. The key is the abundance of rabbits in the Sierra de Escalona. As a curious fact, nests have been seen in garden hedges in houses adjacent to this area.

The abundance of food prevents the contact among Eurasian Eagle-Owl couples, which in some cases end up nesting 600 metres from each other. This statement was verified in a study realized in the area by the Miguel Hernández University of Alicante. They made it clear that in almost 90 % of the cases lagomorphs were the prey of choice for these owls. 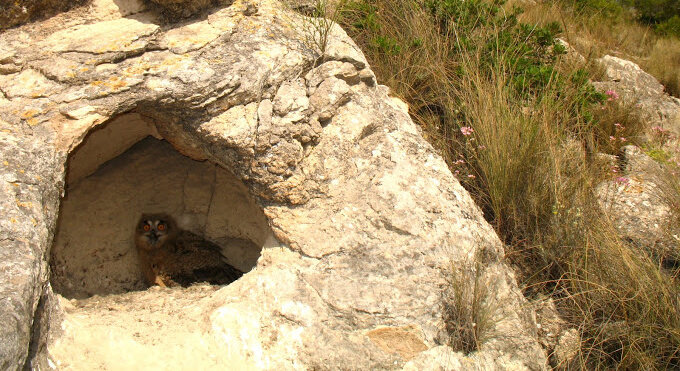 The good health of the Eurasian Eagle-Owl population may have played an important role as a reservoir in the regression the species suffered in Europe in the middle of the last century, becoming a real bastion of the big owl in Spain. Anyway, the numbers are surprising if we bear in mind the pressure put on natural spaces close to the coast in the whole Mediterranean. In addition, the Long-eared Owl, the Little Owl, the Eurasian Scops Owl and the White Owl complete the list of reproductive nocturnal birds of prey in this settlement.

But preserving all this has not been easy. The Platform for the Protection of Sierra Escalona was created from the union of the local movement, ecologists and conservationists. It is now called the Association of Friends of Sierra de Escalona (ASE after its Spanish initials), and from 2001 it has defended the dream of seeing this area of Alicante converted to a Nature Park. When needed, they always reported projects that put the indomitable nature of this mountain range in danger.

As we can see, the conservation of populations of such emblematic species as the Eurasian Eagle-Owl is always linked to the protection of the landscapes that provide them with food and shelter. According to Carlos Javier Durá, president of ASE, in Sierra de Escalona we can find the perfect combination between shelter places and open hunting spaces that the Eurasian Eagle-Owl needs. This is why actions like ASE’s are extremely valuable. Especially because they are created from the spontaneous movement of protecting what is in danger of disappearing forever. From here we want to send them the necessary strength to keep defending one of the densest and best preserved populations of Eurasian Eagle-Owl in the world.