MONFRAGÜE: WHERE BIRDS OF PREY LIVE

Monfragüe is a real dream for bird lovers. If you have never been there, we encourage you to visualise it in your imagination. Close your eyes and imagine 18 000 hectares of mountainous territory full of Mediterranean forest and crossed by two big rivers. We will call them Tagus and Tiétar. Using our imagination, we can place 180 bird species there. No less than 250 Cinereous Vulture, 500 Griffon Vulture, 12 Spanish Imperial Eagle, 35 Egyptian Vulture, 6 Golden Eagle, 6 Bonelli’s Eagle, 90 Red Kite, 280 Black Kite and 30 Black Stork couples.

Monfragüe is a real place and it is located in Spain, in the region of Extremadura. The word “Monfragüe” comes from the Arabic Al-mofrag, which means rough mountain, rocky ground and cliffs being the ultimate expression of this National Park. This is precisely what makes the place special, to the delight of birds of prey enthusiasts. Viewpoints are located in front of these rocky areas, and the birds of prey make their nest under the protection of the two rivers. The good management of the park, which supports the conservation of Mediterranean forests, and the restocking with native species in the areas with eucalyptus and pine trees have done the rest.

Inside the National Park is the small village of Villarreal de San Carlos, where the Extremadura Birdwatching Fair (FIO) takes place every year. FIO hosts both professionals and amateurs with a high turnout and success. Despite its small size, the village is equipped with an interpretation centre, accommodation and restaurants.

The fight for the conservation of Monfragüe is long-standing. There has been a lot of work and effort from the determination of the naturalist Jesús Garzón to declare it a National Park in 1979 until the actual declaration in 2007. It wasn’t easy, but the good work in the management and protection of this emblem has borne fruit. 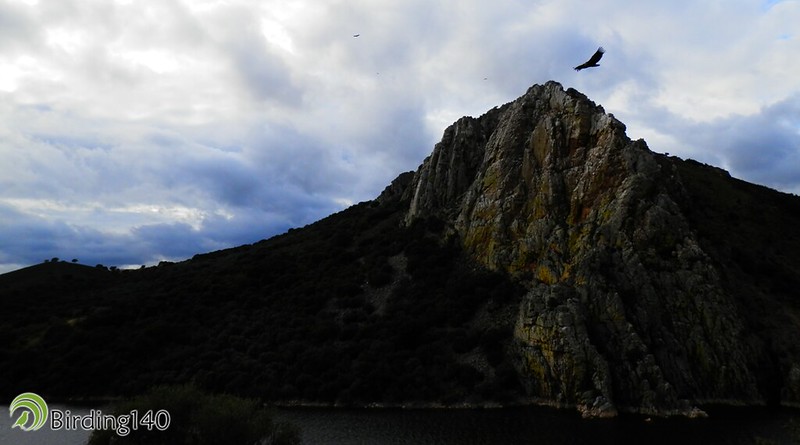 But let’s continue imagining and drive a virtual car which takes us from Villarreal to the Peñafalcon viewpoint, also called Salto del Gitano. From this point we can see, especially during winter, the Griffon and Cinereous Vultures flying over our heads to the crag where the only remaining turret of the old castle is located.It is relatively easy to watch the Blue Rock Thrush here. It is also a good place to enjoy the gracious flight of the Black Stork.

We will now get back to our imaginary vehicle and cross Villarreal again. Going towards Saltos del Torrejón we will arrive to the Mirador de la Báscula viewpoint, where Golden Eagles, Spanish Imperial Eagles and Cinereous Vultures patiently move around in search of food. Winter nuptial flights and the emancipation period of the chicks at the end of the summer are the best moments to see them. If we continue our route we will find two more viewpoints from where we can enjoy the Short-toed Snake Eagle and the Bonelli’s Eagle.

We have reached the final stretch of our trip. We penetrate into the pasture, where we need to pay attention to the short flights of the Azure-winged Magpies from tree to tree, and to the dry trunks the Black-winged Kite uses as an observation point.

Believe or not, watching the birds from the aforementioned points doesn’t cause them any disturbance. I don’t want to forget the pleasant surprises caused by the deer, which are very used to human presence; or my friend the fox, which lets itself to be photographed and can be hand-fed, or the wise and thorough people who dwell the place and who have left everything as it was, allowing nature to run its course.