The Pirón River Valley is an exceptionally attractive natural area located at an hour-and-a-half drive from Madrid. It is a unique landscape of holm oaks and junipers which contrasts with limestone slopes, all accompanied by a beautiful riverside forest.

Our guide for the route is Kike, original from Peñarrubias del Pirón, founder of Masquemonte and probably the best expert in the secrets of the Pirón River. A born entrepreneur, Kike has studied Environmental Science in Spain and Sweden, after what he returned to Peñarrubias, where he has embarked in the adventure of nature tourism.

In order to avoid the hottest hours of the summer, we leave the rural hotel Del Verde al Amarillo, in Peñarrubias, at 6pm. Peñarrubias del Pirón, a small municipal district of only 27 inhabitants, owes its name to the characteristic colour of the slopes that surround it. Located between the ochre and yellow colours of the cereal ocean of the Castilian meseta and the green colour of the Guadarrama premountain range, the landscape surrounding Peñarrubias is such a mosaic where grain fields blend with the first copses that announce the start of the premountain range area.

At the very beginning of the route, we see the first sparrows raiding the mounds of freshly picked cereal. It is a beautiful image, so difficult to see in the major cities where we come from. A few minutes later we leave the village and set our course towards the Pirón River.

We go through freshly harvested grain fields and, together with Kike, we soon enter the holm oak forest. Although it is still warm, as we go further we feel the proximity and freshness of the river. In a few metres, our path runs parallel to the Pirón River course, which receives us surrounding us with a magnificent riverside forest. Holm oaks, junipers, poplars and ash trees move us back in time.

Where there is now a peaceful and beautiful forest were the domains of the powerful family of the Marquises of Covatillas in the eighteenth century. As we move upriver, we find the remains of an agricultural holding.

The first remains we find are located on the other side of the river. It is the great Mill of Covatillas, which was active until well into the nineteenth century. The roof, probably constructed with poplar wood, couldn’t bear the passing of the years and has collapsed dragging down the floor of the upper level. Nowadays, the forest surrounding the mill also colonises its interior, although its impressive walls are still standing, certifying that one of the most important mills of the region was settled on this site.

Following the path parallel to the river, at about 500 metres, we arrive to the Covatillas Bridge from the sixteenth century, which is part of the Royal Road that joins Segovia and Turégano. In former times, the bustle of travellers and cattle of all kinds was continuous, and its narrower central part was used as a cattle counter. Today, this bridge with two spans built with limestone ashlars is frequented by a few hikers and some filmmakers, which use it as a set for their period films.

The beautiful bridge invites us to cross. However, Kike tells us to wait: he wants to show us one of the hidden secrets of the Pirón River. We follow him, still on the same riverside. We cross a small meadow and we enter in a vegetal tunnel of poplars, walnut and ash trees. The path is narrow, the vegetation is thick and the temperature is quickly dropping. Kike stops walking and tells us that we have arrived.

Before our eyes we have a limestone wall, and at our feet, a cistern dug on the ground. Kike explains that about 100 litres per second emanate from the rock, so the cistern always has water. This spring allows the Pirón River to have a flow throughout the year, even in periods of drought.

A few metres away, the water from the cistern overflows through the stone pipes of the Fountain of Covatillas, sculpted with the shape of a lion’s head. Between the pipes, also sculpted in stone, we can discern the coat of arms of the omnipresent Marquises of Covatillas.

Kike leads us now to the other shore. We cross the bridge and keep walking, slowly and in silence, along the path that takes us up the river. Suddenly, something seems to dive into the water. We stop, and for a moment, for a brief instant, we can see a beautiful White-throated Dipper.

We keep walking, leaving the riverside forests to enter a big meadow. We soon encounter another vestige of the past. It is what is left of Caserío de Covatillas, just a few walls half in ruins, which confirm that the meadows we cross were once an important agricultural holding.

We enter the forest again until we reach a new meadow; from here, the terrain begins to expand and the limestone walls that canalise the valley start sticking out. We go through the narrow space between the left side of a metallic gate and the rock wall. Almost imperceptibly, the landscape changes completely.

CANYONS OF THE RIVERS PIRÓN AND VIEJO

The Pirón River, and its affluent the Viejo River, have dug throughout the centuries two impressive canyons in the limestone. The vertical walls that cram the two valleys are drilled by subterranean streams and caves, as a result of the karstification process.

The karstic processes take place when the carbon dioxide dissolved in the water reacts to the calcium carbonate of the limestone forming bicarbonate, which is soluble in water. The waters gradually dissolve the rock, creating caves which form sinkholes and even great canyons when they collapse.

Canyon of the river Pirón

We continue our way and enter the canyon of the Pirón River, looking for the cave of La Vaquera. On the opposite wall we can discern the entrances to multiple caves, and also the entrance to the Chapel of Santiaguito, bored into the rock in the eighteenth century.

Finally, we find the entrance to the cave of La Vaquera behind a juniper. Formed as a result of the karstic process, it has three galleries of one kilometre long. The two upper galleries are not flooded anymore, and they are home to two bat species.

At the entrance of the cave, blackened by the soot of the fires lit inside it for centuries, Kike improvises a small talk about Prehistory and the men who inhabited the cave since the end of the Neolithic.

When we get out of the cave, we walk to the canyon of the Viejo River in order to enter it in a hundred of metres and try to catch sight of some birds of prey. However, we are not that lucky and, fearing that the night would fall, we start our way back.

We cross the bridge of Covatillas and continue through a short and steep section of the Royal Road from Segovia to Turégano that enters the holm oak forest. When we stop going up, already on the top of one of the mounts close to Peñarrubias del Pirón, we finally see our first bird of prey.

A peaceful Griffon Vulture allows itself to be seen while resting on one of the poles of the power lines. We can admire it for a long time, until it decides to reunite with a partner on a farther pole.

We keep walking towards Peñarrubias, talking about the many points of interest of the route while regretting the fact that this time birds had been a bit evasive. Birding is just like that. However, the day was not going to end without finding the emblematic bird of the Pirón Valley.

A magnificent couple of Egyptian Vultures is awaiting us very close to the village. Loyal to Peñarrubias year after year, they return from Africa every month of March in order to nest and take care of their chicks in the Pirón Valley.

To culminate the day, Kike takes us to see the last of the Pirón’s secrets. This time, it is very related to him. During the last months he has been working hard in order to get the permissions from the Water Confederation, design and build a pond for amphibians in Peñarrubias. A small paradise for the indigenous amphibians that are so harshly punished by pollution and invasive species. 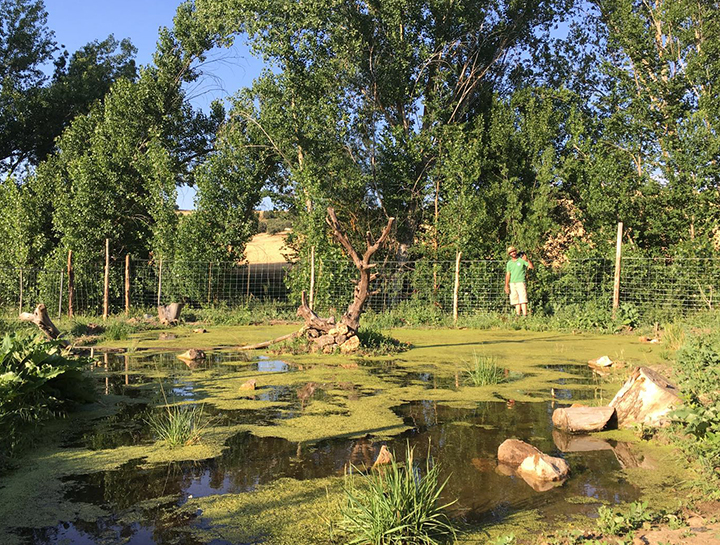 Pond for amphibians in Peñarrubias

We want to thank Kike for the wonderful day we spent with him, a pleasant walk full of stories, anecdotes and laughter. It is a place full of charm that is worth visiting again in every season of the year, and let us be surprised by its beauty, its natural secrets and its inhabitants.