THE EUROPEAN IBIS: THE GLOSSY IBIS 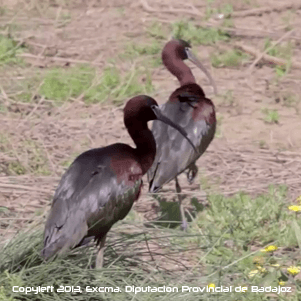 According to legend, the ibis is the last animal to take refuge in a hurricane and the first to reappear afterwards. Those who have admired the silhouette and flight of this bird in the wetlands at sunset will understand why.

In Europe we can enjoy the presence of two ibis: the glossy ibis and the hermit ibis in Spain. Only the glossy variety is considered a nesting species, as the hermit has not done so for 500 years. This explains why we like to call the glossy ibis the European ibis.

The glossy ibis population in Europe consists of between 14,000 and 18,000 pairs. Most can be found in the Black and Caspian seas. In Spain, the glossy ibis population is expanding. It is distributed amongst the marshes of the Guadalquivir, the International Guadiana, the Ebro delta and the El Hondo and Santa Pola wetlands, situated to the south of Alicante. The recovery of the species in Spain has been spectacular: in 2006 were surveyed nationwide 945 pairs, in 2007 they reached 3,777 and in the census of 2013, only in Andalusia, 8,198 pairs were counted.

It is a gregarious species, which nests in colonies. It is often spotted with swans and herons. It normally breeds in the common reed although breeding has been observed in tamarisk bushes or small trees. Although this species is highly susceptible to changes in its natural environment, it benefits from early sexual maturity. Recent studies have shown that some of these birds are capable of breeding in their first year.

It is a dispersive and migratory species which often crosses the Strait of Gibraltar. There have even been cases of birds born in the Ebro delta which have reached France. The first glossy ibis specimens arrive at the breeding area in December, even though the breeding period is from April to July.

The glossy ibis is very vulnerable to the pesticides applied to the rice fields where it lives. The other major problem which this species faces is that its populations are small and are very far apart.

To preserve the glossy ibis in Western Europe, we need to implement a water level maintenance programme, recover abandoned rice fields and promote breeding grounds to increase its area of distribution. To maintain the genetic variability of the species, it is necessary to connect the various existing populations. This will allow us to continue enjoying the sight of the ibis flying around Europe’s wetlands.