The image of a vulture stretching to the horizon in a circular flight after going up to a great height is incomparable. The frayed silhouette disappearing in the blue sky is a very common sight. Vultures can ascend between 300 and 600 metres above the ground. They move using three different air masses in order to do this: thermal masses to ascend in a spiral, slope masses to soar over the cliffs, and converging masses to gain speed. This puts them on the lead to locate and reach carrion before mammals. Thanks to these flights, they are able to cover long distances in a short time. 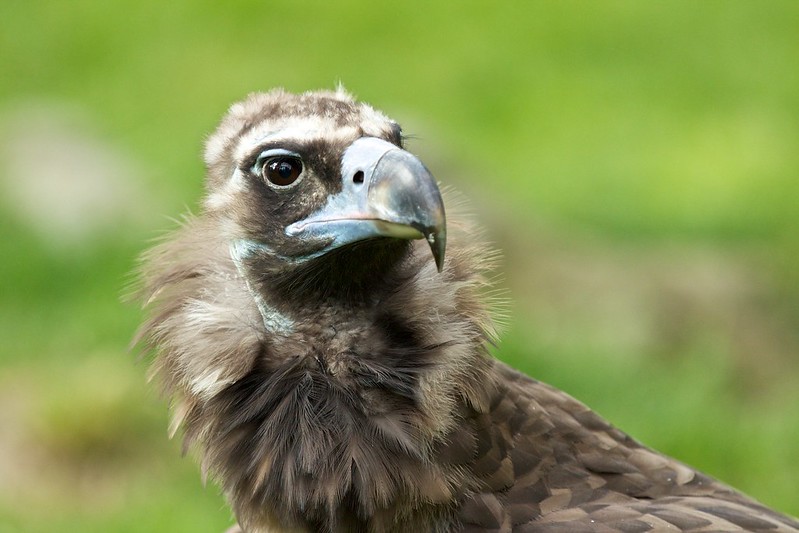 When there is carrion on the field, the hierarchical order for the feast is established regarding the size of the diners. In European vultures, from largest to smallest, it would be: Cinereous Vulture, Griffon Vulture, Bearded Vulture and Egyptian Vulture. Cinereous Vultures prefer the skin and big pieces of flesh from the dead animal. This would explain the down feather of the head and the short feathers of the neck. Griffon Vultures prefer the entrails and masses of flesh. This is why their head and neck are covered by short down feather. The Bearded Vulture eats the marrow of the skeletal remains after dropping it over the cliffs; for this reason, its face is coated with feathers. Lastly, the Egyptian Vulture can access small pieces of meat thanks to its uncovered face.

As we can see, the type of neck and head feathers in each species is suitable for the different parts of the corpse they need to reach. It is also important to note that each species has a different menu. Carrion from goats and sheep is exploited by all of them; the Cinereous Vulture, moreover, doesn’t reject the rabbit carrion; the Egyptian Vulture takes advantage of birds and reptiles, and the Bearded Vulture, apart from bones, uses the carrion of small mammals. The intelligence shown by the Egyptian Vulture is also surprising: it feeds on eggs from other species, throwing little stones with its beak to break the shell.

In any case, the biggest food supply for these scavengers are dead domestic animals. Although we should stress the reported cases of Cinereous and Egyptian Vultures catching small live preys. We should also bear in mind the surprising cases of Egyptian and Bearded Vultures stealing preys from carnivorous mammals. 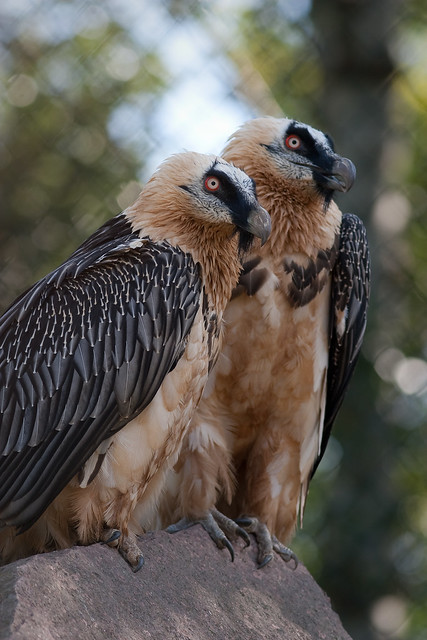 The Griffon and Cinereous Vultures are the ones who spend more time surveying carrion. It should be noted that the size of the territory becomes shorter and limited if the presence of carrion is predictable. This is why they tend to nest in colonies, because nourishment can be found more easily by observing the behaviour of other members of the colony. Immature Egyptian and Bearded Vultures also take temporary advantage of this fact, by using communal roosts for the same reasons. But let’s clarify this: Egyptian and Bearded Vultures are territorial species, while Griffin and Cinereous Vultures are colonial species. Talking about nests, the Griffin Vulture is the less complicated, and it usually takes the nests of Bonelli’s Eagles and Bearded Vultures. On the other side we have the Bearded Vulture, which seeks caves or cavities sheltered and protected from climatology to build its nest.

We will compare now the reproductive cycle of the four vultures. The heat period lasts from December to February for all the species, except in the case of the Egyptian Vulture, which goes from March to April. The laying goes from December to February for the Griffin and Bearded Vultures. Cinereous Vultures lay from February to March. Meanwhile, the Egyptian Vulture lays eggs from April to May. As regards the number of eggs, Griffin and Cinereous Vultures lay one, and Egyptian and Bearded Vultures lay two. Hatching usually takes place in April for all the species, except for the Egyptian Vultures, which goes from May to June. However, the surprise comes when we compare the stay of the nestling birds in the nest, which extends until September for the four species. As we can see, the Egyptian Vulture seems to have a few months of delay in reproduction. The explanation is simple: it is the only migratory species. While the Egyptian Vulture arrives to the continent in March, the other three species only undertake juvenile dispersions. Talking about dispersions, about 100 immature Griffin Vultures concentrated in the coast of Alicante in Spain in 2008. In a single day, the birds of prey were pulled by a strong wind until they spontaneously colonised the Balearic Islands. It was, without doubt, an unprecedented case.

Another strange behaviour of these scavengers is the philopatry that makes them return to the place where they were born. Conservationists take advantage of this fact to carry out releases of immature individuals in places where they pretend to reintroduce the species. Among all the implemented projects, we will mention the one carried out by the Fundación Quebrantahuesos with the Bearded Vulture in Aragon and Asturias. As well as the Fundación Gypaetus, which reintroduces this species in Cazorla (Spain) and the Vulture Conservation Foundation in the Alps. The reintroduction of the Cinereous Vulture in the Pyrenees is shared by GREFA and TRENCA. Furthermore, Egyptian Vulture releases are carried out by the Capovaccaio project in Italy, and GREFA has released Griffin Vulture specimens in France, Italy, Bulgaria and Portugal. Another measure in favour of the vultures is the Vulturnet project, which aims to connect all the populations of European vultures by means of corridors, reintroduction, educational programmes and the creation of SPF (Supplementary Feeding Points). Colectivo Azálvaro manages some of these points in the province of Segovia, with excellent results.

The most common mortality factors for the four species, in order of importance, are: poison, collisions with high tension lines or wind turbines and hunting. In the last years, it has also been a concern the appearance of high concentrations of lead in the corpses of these birds, and currently of diclofenac, which could be decimating these scavengers. More specifically, both the Bearded and the Egyptian Vulture suffer greatly with the activities and sports carried out by humans close to their nesting corbels, while the Cinereous Vulture suffers the loss of its breeding areas, because the extension of the Mediterranean forest is declining.

Despite the persecution suffered in the past, due to the stealing of eggs and specimens for private collections or for being declared a vermin, nowadays its presence indicates cleanliness and healthiness in our fields. Moreover, they are easy to observe and they are normally accustomed to the presence of humans, because livestock has facilitated their sustenance over the years. During the sixties, the number of specimens decreased dramatically, but with time, their public image has improved. In the past they were considered harmful animals, and today they are symbols of quality of our environment. With this post, we hope to contribute to clean the image of these birds and provide them with the future they deserve.