THE MYSTERY OF THE MISSING SPARROW (PART ONE) 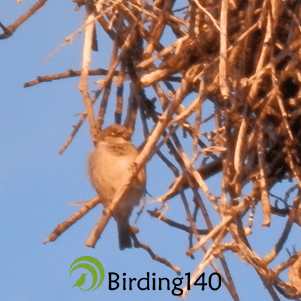 When was the last time you saw a sparrow? Wait, still no answer, think hard, did you see any sparrows yesterday? Last week? Last month? Probably, if you live in Madrid you won’t have seen a sparrow for several days and if you live in London, perhaps months have passed.

So what’s happening I ask you, if the sparrow is the most abundant bird in the city why do we hardly see it now? Perhaps the first answer I have off the top of my head is that sparrows have moved away from cities to avoid pollution, to flee to the countryside. However that’s not the answer, sparrows are an urban species which has lived with man since the Neolithic era. In fact when a town is abandoned by man it doesn’t take long for it to lose its sparrows. The answer is that the sparrow is in decline and the reason for this is a mystery.

Al the large European cities which have studied their sparrow population have discovered that it is decreasing year on year. In London and Prague sparrows have practically disappeared and in Paris and Madrid their numbers have reduced significantly. Scientists have proposed various theories to explain the phenomenon, none of which has been fully accepted.

Initially it was thought that the reason for the fall in the sparrow population could be the pollution or noise in cities, but it has been demonstrated that sparrows are more resistant to these two urban scourges than other species and, for example, they don’t have an objection to gathering or nesting very near roads with a high density of traffic. We need to look for a clue to get to the bottom of the mystery.

The sparrow, as it has always been a very abundant and urban species, has aroused little interest amongst ornithologists, so there is little historical information about its populations. We know that it has been very abundant and little more. But since starting to study it in an exhaustive way, some interesting things have been discovered, one of which seems to be a clue. In some cities its decline is uniform but in others there is a sharp contrast between districts. In the centre of London it has disappeared completely whilst in the rest of the city there are still some small colonies which are increasingly disperse. And if we go to Berlin something very strange occurs. In the west of the city the sparrow has disappeared whilst in the east the population remains.

In the United Kingdom, a group of scientists from the RSPB, the Montfort University and Natural England think they have discovered the reason for the sparrow’s decline. According to their research the death rate amongst baby sparrows is very high due to the fact that they are poorly fed. Adult sparrows feed mainly on seeds, however their young need the proteins provided to them by insects to grow. In recent years, many of the deciduous trees and bushes in cities have been removed, which has reduced, along with increased cleaning, the populations of insects which are used by sparrows to feed their young. In addition, in rural areas, farming systems have changed to result in generalised use of insecticides and herbicides which kill insects and the scrubland which sustains them.

Many think that poor feeding of baby sparrows due to a lack of insects has had an influence on the decline of the species, however they believe that this cause alone cannot justify its almost complete disappearance in many cities. They believe that there must be another cause which remains to be discovered. We need another clue to figure out the mystery.