THE SWALLOW THAT NESTS IN OUR BALCONIES

The swallow is probably the most famous migratory bird in the world. From years gone by, philosophers like Aristotle or poets like Bécquer have been wondering about the travel destination of these birds, considered a symbol of loyalty and fidelity, marital happiness or good luck in the home.

Swallows use a complex language in order to communicate. They use movements and positions during flight, and they also use their song. They have different songs for different contexts: dangerous situations, mating, or just calling their young back to the nest.

This bird has an amazing memory. It is able to find the same nest it used the previous year, or even establish in the same nesting place where it broke the shell. 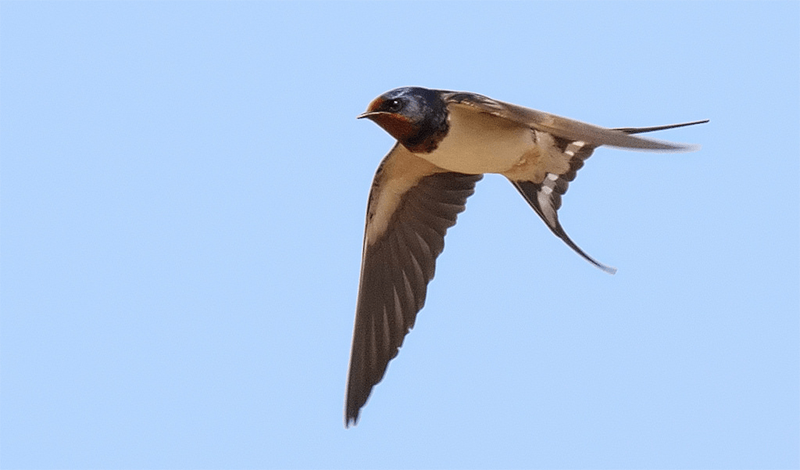 Where does the Barn Swallow live?

You have surely wondered why the swallow is so famous, and the thing is that it is one of the best distributed birds in the planet, breeding in Europe, Asia, North America and Africa. In addition, it can be found on the other side of the planet due to the fact that its wintering quarters are located in the southern hemisphere, in far away countries like South Africa, the south of Argentina and the north of Australia. The online place in the southern hemisphere where we can find a breeding swallow is in the Argentinean Pampa. 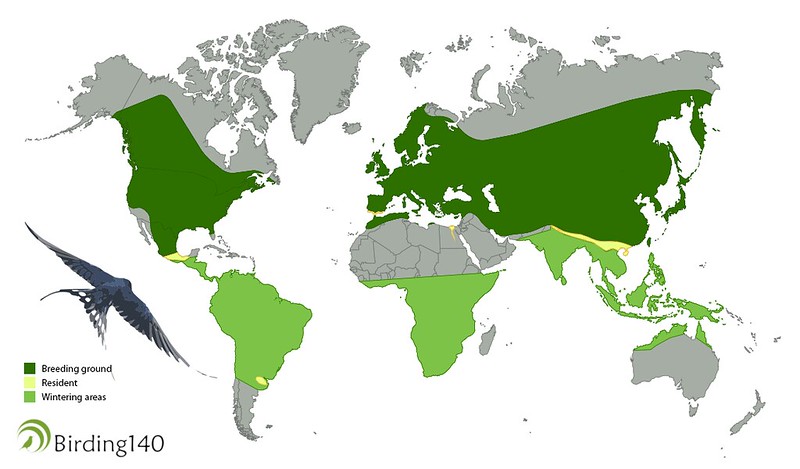 The Barn Swallow has always been closely linked to humans. It is not unusual to find its mud and straw nests in barns and stables adjacent to open landscapes with crops and cattle. It helps humans being to take care of the fields due to their insecticide work, because it gets the necessary food to breed its chicks from the insects.

The migration of the swallows

Swallows migrate in the company of others, whether in large flocks or in small groups. Post-nuptial migration starts in autumn. At the end of September, or well into October, whole swallow families gather to prepare their trip. During the course of fifty or sixty days they will reach the shelter of southern lands.

It is considered one of the bird species that travels longer distances in their migrations, reaching 71 000 kilometres per year. They can fly about two hundred kilometres in a single flight.

From April or May, after crossing the dangerous deserts and seas, the songs of the swallows announce the coming of spring when they return from their winter quarters. This is the moment when the male should court the female.

Mating and breeding of the swallows

Swallows pair for a lifetime, and for that reason they are synonymous with fidelity, but it doesn’t mean that the male is resting on its laurels. It should turn up with the appropriate weight, with its chestnut-coloured neck and show off its long symmetrical feathers. All this to ensure that the female still finds him attractive and doesn’t “cheat” on him.

The laying goes from three to six spotted eggs, of which only a part will reach adulthood. The parents, both the male and the female, will continuously feed their chicks while they help the farmer to clear the fields of invertebrates. Thanks to their great manoeuvrability, they can hunt multiple insects and feed their offspring while flying. It seems like a hard work, and it is indeed. A brood can consume about 1.2 kilograms of insects. In other words, the chicks can be fed up to 400 times a day. 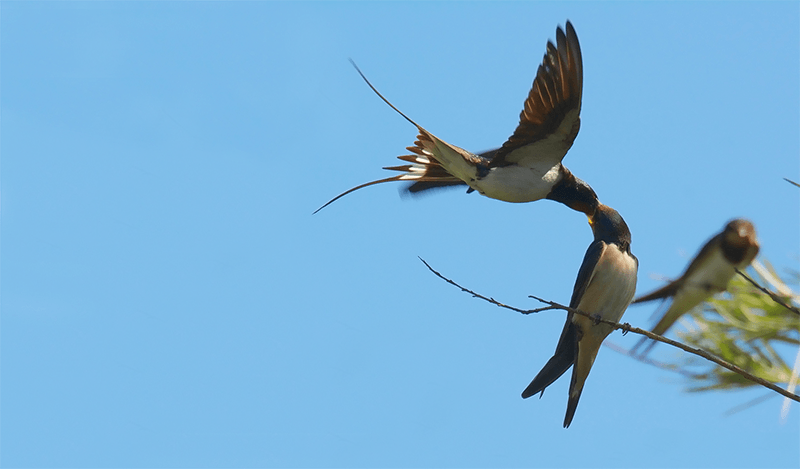 One of the 400 meals a day | Author: Stefan Berndtsson · Creative Commons: Attribution 2.0 Generic

After three weeks, the newborn bird will leave the nest, although its parents will keep feeding it while it gets ready for its first flying lessons. The chicks would soon be able to get their own food and adjust for their first migration. They still have time, since their parents will be busy breeding up to two more clutches that summer, to a total of eighteen chicks.

Will the black swallows return?

Swallows are not an endangered species, but their population is in decline throughout Europe. In fact, the European Bird Census Council warns about the 35% decrease of this species in Europe during the period between 1990 and 2011. In Spain, for instance, we can see a 30% decrease, as reported by SEO/BirdLife through the SACRE programme for the monitoring of common birds in spring.
The reasons can be found in the human abandonment of rural areas in favour of urban zones, in the indiscriminate usage of insecticides that spoil their chick’s food, in the decrease of their nesting zones -given that it is hard for swallows to find mud to build their nests in the big cities, or to find the appropriate areas to place them- and, lastly, in the removal of their nests by human beings.
Climate change has an influence too. There is a growing number of mild Octobers, which makes insects to live longer. Consequently, swallows delay their departure to their wintering quarters. They take the risk of starting their trip too late and die of cold. 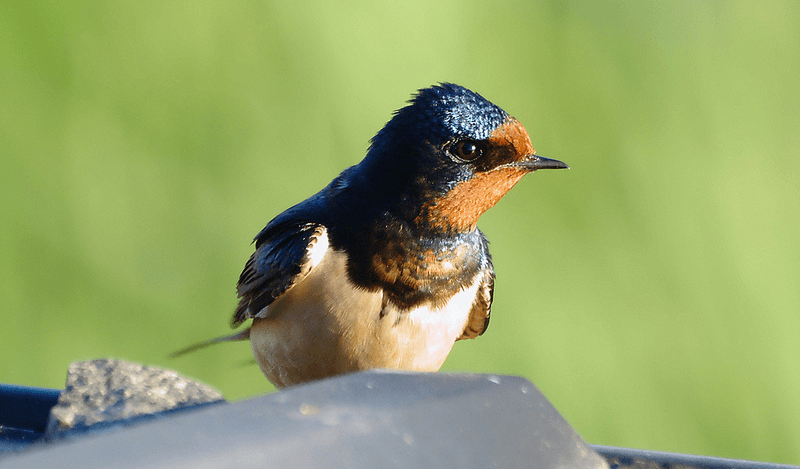 The bird that influenced the world: Myths and legends about swallows

The swallow is the most inspiring bird for human beings throughout the planet. It is the protagonist of many myths and legends. In some areas of Africa, it is synonymous with purity, because it stays up in the air for a long time and don’t stains its plumage with the earth. In China, they symbolize happiness inside marriage, as they are faithful to their partner throughout their life. In Ancient Greece, swallows where the symbol of clairvoyance, since they give sight to their blind-born chicks when they feed them.

When the early sailors sighted this bird, they new the coast was close. For them, it symbolized their sound and safe return to the home, because swallows always return home. The more swallows a sailor had tattooed on his body, the more experienced he was considered to be, as they would usually get a swallow tattooed every five thousand nautical miles.

Swallows in dreams are always a good omen: for instance, if they are in a house, it means it is a prosperous household that has got its fortune with honesty. If they nest in it, happiness will spread to all its inhabitants. If a flock of swallows arrives, be prepared to receive news from distant relatives.
Swallows have created a very close bond with humans while traveling the world in their long migration. They have aroused the curiosity of human beings, who ask themselves where swallows go in winter. It is in everybody’s hands to make them live on, so they can keep motivating people with that feeling of happiness when the spring comes. What about you? What do you feel when you see a swallow?