A DAY IN THE SHOOTING OF BIRDS ON WINTER

Today we will tell you about our trip to Extremadura. Together with the producer 1080 Líneas we will get into the shooting of the documentary Birds on Winter. The story of their last production starts with the arrival of the great flocks of cranes to the Iberian Peninsula after crossing the whole European continent from the faraway Scandinavia. Filmed in Extremadura and Gallocanta, the documentary narrates the adventures of a family of cranes, which should show their chick the new landscapes where it must survive during winter, the new food it should live on and, ultimately, teach everything it needs in order to grow up into an adult crane, able to overcome countless obstacles during its annual trip throughout Europe.

Our shooting started in the small village of La Garrovilla, in the midst of Extremadura and not far away from the city of Mérida, where we were picked up by Carlos Pérez and Joaquín Gordillo, director and camera and sound operator of Birds on Winter. Together we entered the amazing landscape of grasslands and wetlands in Extremadura. The plan for the day was to walk along the radial path of the reservoir while filming the cranes, and to find an appropriate place to record the arrival of the cranes to the roost in the falling evening. Carlos assured us that the arrival of the cranes at sunset would be spectacular.

After crossing a section of crops we arrived to the sheet of water of the reservoir. The day was bright, winter was being clement and we could hardly feel the cold. Moreover, a lot of cranes had already arrived to Extremadura.

Despite it being midday, we could soon spot the first ones: a group of about fifty cranes was resting on the shore of the reservoir instead of looking for food. We went down to set the camera and film them. We could observe them for a few minutes, but shooting documentaries is even more complicated than birdwatching. Mounting the equipment takes a few minutes and birds might fly away during that time. We continued our route while a beautiful Red Kite gained height above us on the cloudless sky.

On a bend in the road we had a great surprise. In front of us, in a small log standing out of the water, we could see a magnificent Osprey for a moment. Although we could only see it for a few seconds on the log, and during its characteristic low flight above the water afterwards, being able to see an Osprey is always exciting.

We continued our way until we found a new surprise near the tail end of the reservoir: a group of about twenty lapwings were soaking their legs on the shore. Meanwhile, in the distance we could spot a new group of cranes which were feeding on the grassland.

Cranes on the grassland

The hours went by quickly, and we took a break to eat and recapitulate. Sitting on a big rock on the shore we made short work of our sandwiches, a delicious omelette prepared by Joaquín’s mother and a cup of warm coffee. Carlos told us about his career development from traditional TV programs to nature documentaries. The countless hours they spend crouching in a hide exposed to the harsh weather in order to achieve, if they are lucky, a short sequence. All of this without forgetting the time dedicated to find the adequate spots to shoot the species they are looking for.

A result of so many hours of work was the documentary Spring. The Return of Life, broadcasted in television channels in Germany, France, Italy, Spain and Portugal. 1080 Líneas is currently immersed in the distribution of From the Sky, which we are sure will also be of great success. At the same time, during the four months of crane wintering, they are shooting their next documentary: Birds on Winter.

We finished our after-lunch conversation and continued with the shooting. We headed to the viewpoint located on the south of the reservoir and set up the camera. A grebe observed us from the water while we were filming a small islet where about fifty cormorants were drying their feathers in the sun.

After that, we went to take some long shoots of a typical landscape of the Extremaduran grassland, and we prepared ourselves for the arrival of the cranes at dusk in the place chosen by Carlos. We hid the car, the shooting equipment and ourselves, so the cranes wouldn’t see us from above when they were approaching the roost.

While we were waiting, a group of geese landed on the fields in front of us, really close to a group of storks, a Great Egret was fishing near the shore, and a gracious White Wagtail posed for us. Little by little, the colours of the evening lit up the sky, and the trumpeting of hundreds of cranes announced their imminent arrival. We can only say that Carlos was right: the arrival of the cranes at dusk was spectacular. 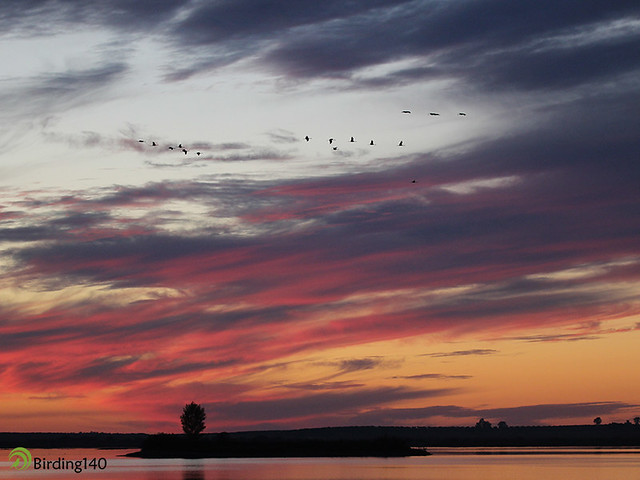 We’ll leave you with the trailer of Birds on Winter.