As many of you know, in November 2014 we encouraged you to participate in the #Birding140 cooperative project to follow the migration of the Common Crane (Grus grus) in Europe. We asked you to share your sightings via Twitter indicating the place, date and time of the sighting, as well as the approximate number of cranes in the flock.

We were overwhelmed by the response: many of our friends decided to participate, and with the information received we could draw the first migration maps and write the first report in January. Many of you have continued sharing your sightings since then. Today we want to present a new report where we try to compile the data you have sent us in the most graphic way possible.

The way to show the information in the maps is similar to that on the first report. We indicate the sightings with a red dot on the map of Europe and highlight five places which are especially important for the cranes during their migration. The chosen settlements are Diepholzer Moorniederung, Lac du Der, Arjuzanx, Gallocanta and the region of Extremadura. Over these locations we place a green circle, of larger or smaller size according to the number of cranes gathered at the end of the period referred to in each map.

Moreover, we have marked a new place with a star. It is the reservoir of La Sotonera, a settlement that plays a crucial role in the prenuptial migration of the Common Crane when there are certain weather conditions in the Pyrenees. Let’s start with the presentation of the data you have sent us. 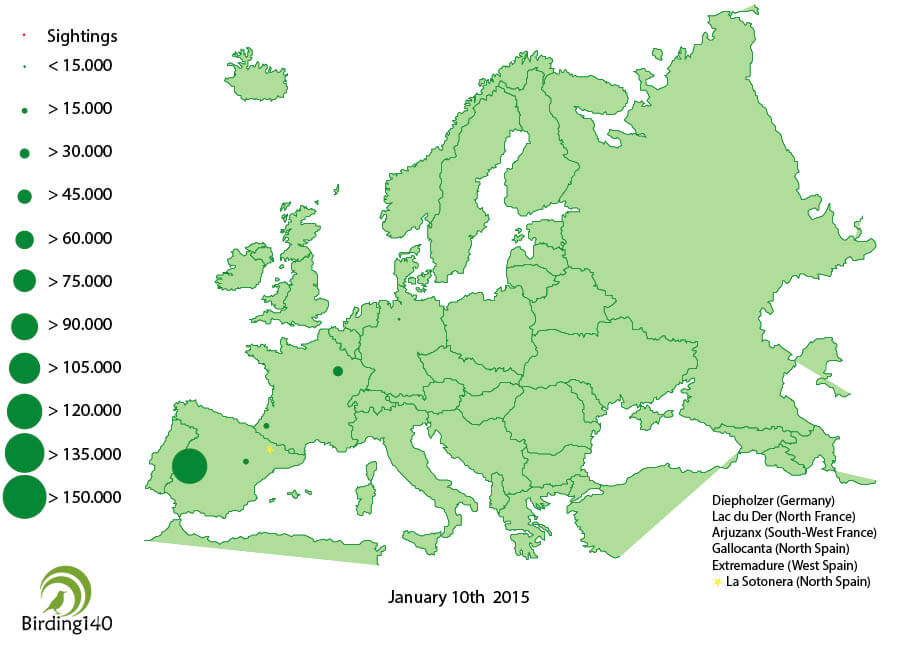 Here is the first map. It reflects the situation as we left it on the first report, on 10 January 2015. Most of the cranes that followed the western route are scattered in the centre and south of the Iberian Peninsula. Approximately half of them have chosen the region of Extremadura as their wintering location.

We continue with the second map. It shows the sightings between 11 January and 10 February, as well as the situation of the five reference places on this last day. As you can see, there seems to be no changes: cranes spend the winter calm without making any big movement. 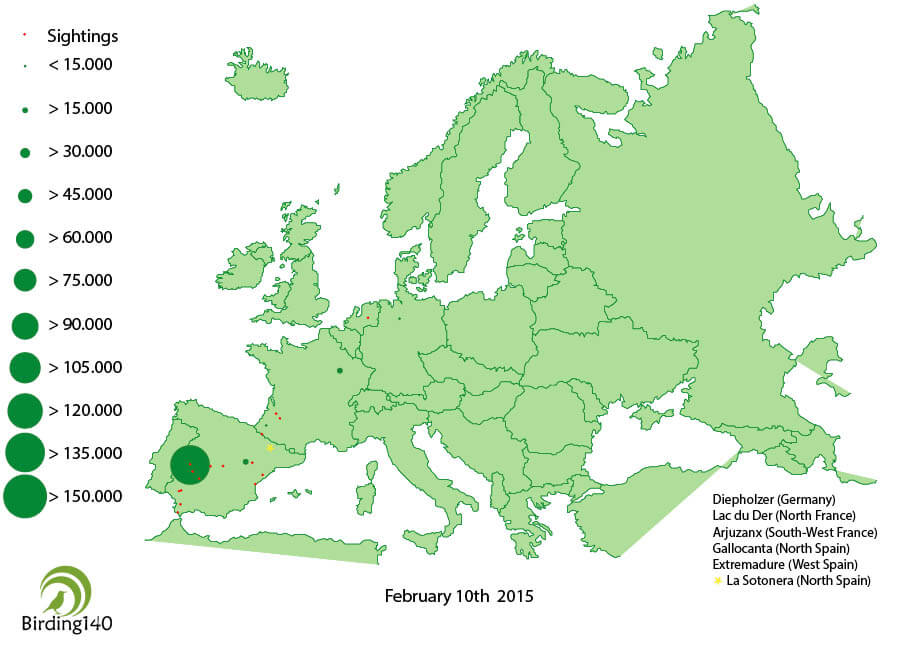 However, there are indications that the great migration is about to begin. On 3 February the first flocks crossing the Pyrenees were detected. They are small groups that return to the north taking a route that most ornithologists consider secondary in prenuptial migration, the Navarre Pyrenees.

There are two big questions about the valleys that cranes use in order to cross the central Pyrenees, and also about the use they make of La Sotonera reservoir as their last resting point before crossing to France. In order to solve these issues, the volunteers from Grupo Ornitológico Oscense (ornithological group from Huesca) carried out a census in La Sotonera between 14 February and 15 March, and they gathered the existing data from that period in the province of Huesca. We talked about this important initiative a few weeks ago in our post “Cranes fly over Huesca 2015”.

The peace reflected in the second map was broken in the morning of 22 February. That day, the south and centre of the Iberian Peninsula becomes a swarm. Enormous flocks move northeast, giving start to the great migration. In just two days, entire regions are left deserted. Despite all the disturbance, the cranes don’t travel a very long distance in the first stage, just a few hundred kilometres. More than migrating, the cranes are gathering in the northeast of the peninsula. It is time to look at the lake of Gallocanta and the reservoir of La Sotonera.

In the evening of 23 February Grupo Ornitológico Oscense counts 26,550 cranes in La Sotonera. On the 24th, the Government of Aragon registers 82,906 cranes in Gallocanta; most of them have arrived to the lake the previous night. The great flocks behave like armies, positioning for battle. The cranes are getting ready for the big challenge of crossing the Pyrenees. Two large forces of nature are about to face each other. In a few days, the impressive summits of the Pyrenean wall, higher than 3000 metres, will be challenged by the instinct of a 6-kilo bird that is ready to face all the necessary risks in order to reach its breeding sites in the north of Europe.

After a few resting days, the turning point arrives: in the morning of 28 February tens of thousands of cranes take flight from Gallocanta and other nearby points. They are about to challenge the Pyrenean colossus. Today is the big day. This year, Zaragoza has been one of the best places to admire the show. It is located mid-way between Gallocanta and the Pyrenees, and its people could enjoy the flyover of tens of thousands of cranes throughout the day. The social networks filled with images, and also with sound. The trumpeting of a gigantic army of over 80,000 cranes silenced the noise of the city. Nobody in Zaragoza could help looking at the sky that day.

The weather was favourable for the stopover, and the majority managed to cross the mountain range. Tired by the great effort, but victorious, they continued their trip. The night fell over those flocks that weren’t fast enough to cross over. Trying to cross the Pyrenees after dark is a suicidal mission for a crane.

At night, the great soaring birds can’t get help from the thermal updrafts, and the intense wingbeat that is necessary to surpass the mountain range involves a great risk of dying of exhaustion. In theory, the cranes should give up their attempt and return to the lake of Gallocanta, soaring 200 kilometres southwards. However, they have an ace up their sleeve.

This is the moment when we can understand the importance of La Sotonera reservoir. Located at the foot of the Pyrenees, it is the shelter used by the cranes that are caught by the night or the bad weather.

The cranes that didn’t manage to take the leap to France on the 28th, and others that arrived later, gathered at La Sotonera. On 3 March about 82,000 cranes leave the reservoir and manage to cross the Pyrenees. The great challenge has been defeated. 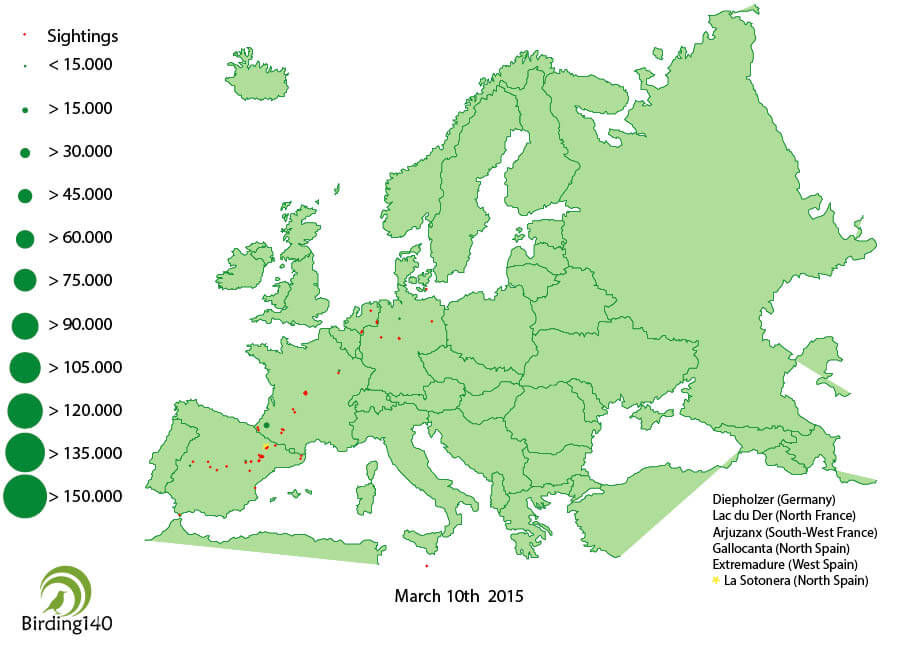 Sightings of migration of cranes in Europe until March 10, 2015

The third map shows the situation in Europe on 10 March. As you can see, only Arjuzanx had a significant number of cranes. The great flocks are in the middle of their trip through the inside of France.

The map also reflects the sightings received between 11 February and 10 March. If we take a careful look we can see how the red dots draw the main migration route from the centre of the Iberian Peninsula to the north of France. We can appreciate how the great flocks have crossed the central Pyrenees and are now traveling northwards through the inside of France, via a more eastern route than the one they followed when traveling south in November.

We can also appreciate some sightings in the western and eastern Pyrenees. They seem to indicate two secondary routes used by a relatively small number of cranes.

We want to thank the contribution of all those that have participated in the #Birding140 experiment. We never thought that so many people from so many different countries would like to take part in this little cooperative experiment. During the next months we will continue gathering the sightings received in order to learn more about the migratory routes and behaviour of the Common Crane.

To conclude, we have a collection of many of the sightings that we have received through Twitter. Despite the effort, our cranes still have a long way to go. The cooperative experiment continues. We are looking forward to your tweets. THANK YOU!