We present the third tracking report about the migration of the Common Crane (Grus grus) around Europe. The analysed period covers from March 2015 to January 2016, which is also the period of the breeding season in the north of Europe and the subsequent migration to the south.

As in previous reports, we show the data in the form of maps. Each sighting is represented by a red dot, and we also place five green dots to indicate the number of cranes present at the end of the period to which each map refers in the following places: Diepholzer Moorniederung, Lac du Der, Arjuzanx, Gallocanta and the region of Extremadura.

Here is the map we used to conclude our previous report. It reflects the situation in Europe on 10 March 2015 and the sightings received between 11 February and 10 March.

Sightings of migration of cranes in Europe until March 10, 2015

As we could see, the great flocks are in the middle of their trip through the inside of France, and only Arjuzanx hosts a significant number of cranes. What has happened since then?

The great flocks arrive to the Baltic Sea and most of them take the leap to the Scandinavian Peninsula. After a few days of rest in places like Hornborga, the scattering begins.

The Common Crane, sociable and gregarious during the migration and wintering, becomes territorial during the breeding season. Each couple builds a nest on the ground with grass and small twigs, thus claiming for themselves a territory of over 200 hectares in swampy and marshy areas where they don’t allow the presence of other cranes.

In May they carry out the laying, usually two eggs, which they will incubate for four weeks. Crane chicks are nidifugous and they leave the nest a few hours after being born in order to follow their parents. At late July or early August, they carry out their first flights and, shortly after that, they are prepared for the greatest adventure of their lives: the great migration to the south.

In the following map we can see the situation on 10 November 2015. Some of the great flocks have already arrived to the Iberian Peninsula. However, most of our cranes are on their way, resting in Germany and the north of France. 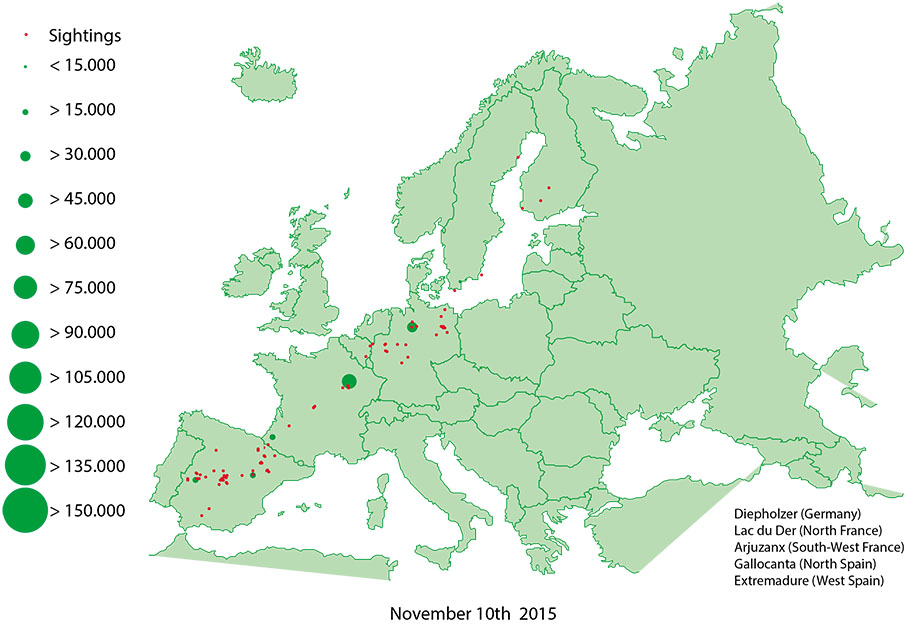 The chicks take their first migration with the company of their parents, discovering how big is Europe and the great diversity of landscapes and food sources that can be found in the continent. When they are adults, they will teach their own chicks the migratory route they are now learning from their parents.

As we can see, the cranes are in no hurry and travel gradually to the south. As long as the weather doesn’t get worse, they will carry out the migration in a slow deliberate manner. For them, it is important not to wear out their chicks and to learn the migratory route. 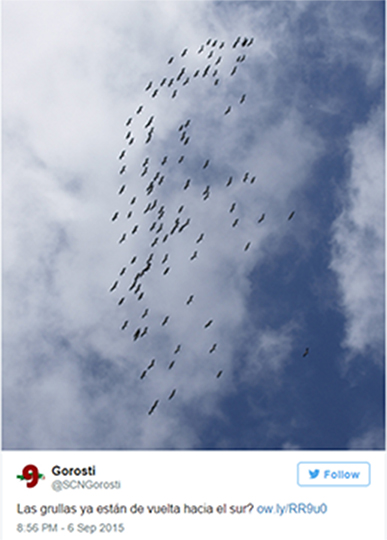 The first sighting of a flock crossing the Navarrese Pyrenees towards the south, over the Urkulu Mountain, took place on a very early date, 5 September. Although the great crossing happens on 30 and 31 October and 1 November, during these days it is easy to sight the flocks of cranes entering the Iberian Peninsula from almost any place of Navarre, and also from the centre of Pamplona. 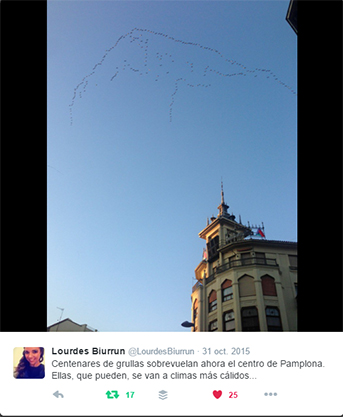 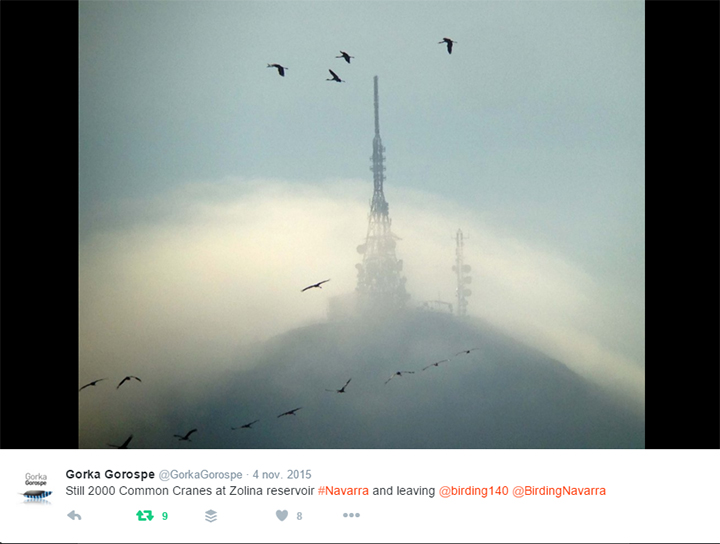 In the following map we can see the situation on 10 December. Most European cranes have already arrived to the Iberian Peninsula, and many of them are concentrated in the region of Extremadura. However, we can appreciate that there are still many sightings in Germany. What is happening? Why are there still cranes so far north? 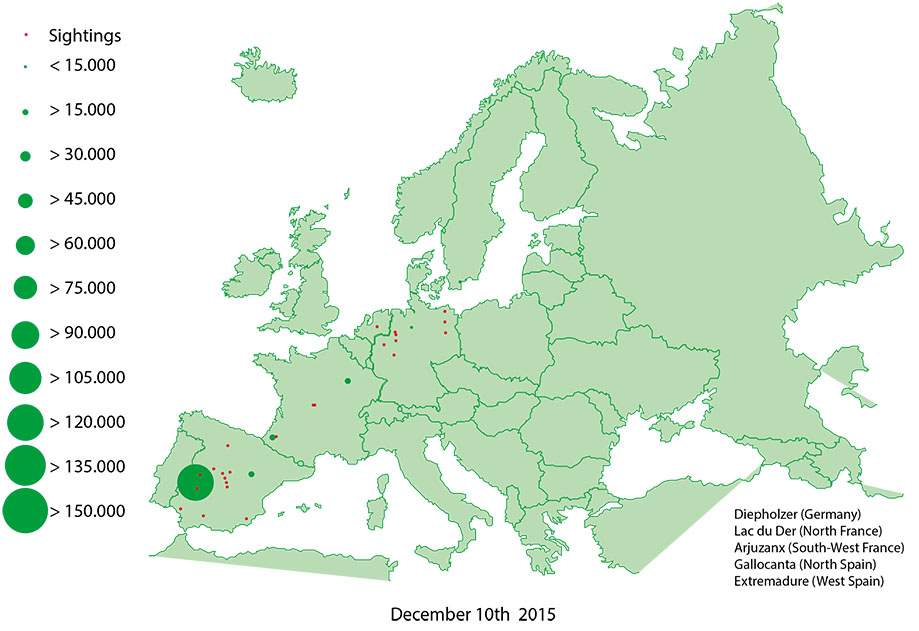 The reason might be that winter is being much warmer than usual, but it is difficult to know. Is climate change affecting the migration of cranes? We don’t know either. As we get to know the migration of the Common Crane better, new questions come to mind.

In the following map, on 10 January 2016, the situation seems stable: our cranes spend the winter peacefully in the Iberian Peninsula, taking only small trips. There are only a few surprises, like Neil Renwik’s sighting of a Demoiselle Crane (Anthropoides virgo), coexisting with a group of Common Cranes in Extremadura. The calm days won’t last much longer: in a few weeks, the migration will start again, this time towards the north. 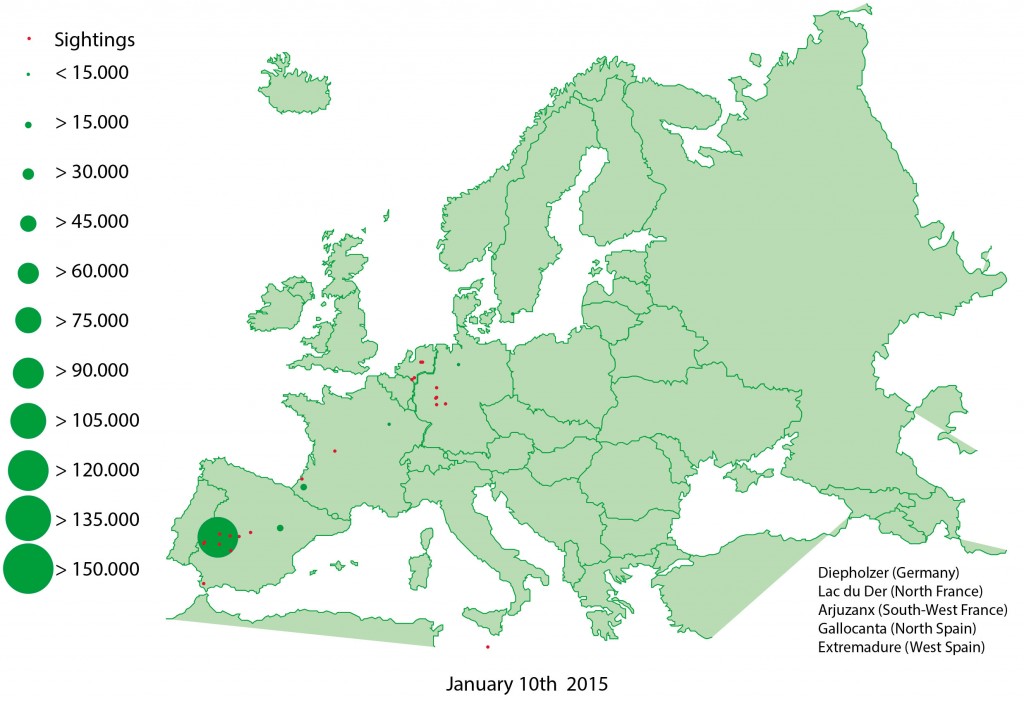 We want to thank all of you who took part in the cooperative project #Birding140 for your dedication. Without your help, it wouldn’t have been possible to prepare the migratory maps. We have compiled some of the messages that we have received through Twitter. THANK YOU!

Our cranes are starting to regroup in order to start their adventure again. They will soon hit the Pyrenees and travel around Europe again in search of their breeding sites. Please, send us a tweet if catch sight of a flock.