The cold morning presented a clear sky after the storms, defying the prediction of heavy snowfalls throughout the Iberian Peninsula. In the bullring car park, in the monumental town of Trujillo (Extremadura), I was setting the camera and found an interesting backlight in the first pictures.

While I was waiting for my guide, I remembered the first time I visited the medieval city with my parents. The enormous main square, with the bronze equestrian statue of Pizarro was a spectacular view. The figure of the conqueror of Peru, with its greenish hues, stood out against the San Martin church in the background.

The blazing sun shone warmly over the summer stones. In the terraces set up around the square, visitors charged their batteries under the parasols and the canopies of the colonnades. My child perspective made me set my eyes on a group of British people who looked at the sky through their telescopes and binoculars amidst amazement and laughter.

I could only differentiate the White Storks, squeezed in the huge nests on top of the towers of the palaces and churches that surround the square. With child curiosity, I asked what those men were doing. A local woman who passed by replied: “They are a bit crazy…” She was undoubtedly wrong. Where we could only see a ceiling, these urban birders enjoyed the flight of Cinereous Vultures, Imperial Eagles, Red-rumped Swallows… and, specially, Lesser Kestrels. This is a tribute to these men and so many other foreigners who came to prove that Trujillo stands out not only for its monuments, but also for its bird life.

Martin arrives to the car park, taking me out of my memories. In my opinion he doesn’t need an introduction, but for those who do not know him yet, Martin Kelsey studied ornithology at Oxford, worked for Birdlife International and helped establish the Neotropical Bird Club. He arrived to Extremadura in 1992 on a pleasure journey and he finally stayed to live there. Together with his wife, Claudia, he now runs the rural house “El Recuerdo” (“the memory”), specialised in ornithological tourism and located at only 10 km from Trujillo. It is an international reference point for this kind of tourism, because it is a part of the Birding in Extremadura Club. From their website, birdingextremadura.com, we can get an overall picture of the sighting options we are offered. In a flawless Spanish, Martin promised that, in little over an hour, we would move from the bullring to the silos, climbing up to the castle and concluding our visit in the main square. Those are, without a doubt, the ornithological hot points of the route.

From the 18 Extremaduran SPA specific to the Lesser Kestrel, the Trujillo SPA, with its over 126 Ha, is the largest one, and it is included in the Natura 2000 Network. The main breeding colonies are located in the bullring and in the new silo. The bullring, built in 1848, is still in use, with its 8000 seats. In 2004 it was declared a SPA, thanks to the over 30 couples of Lesser Kestrel that breed there during the sensitive period of the species (from February to the end of July). In order to strengthen the colony, last year 30 nest boxes and a false ceiling where installed during the repairing works of the roof.

Our explanation is interrupted by a specimen of Lesser Kestrel, who flies above us greeting us with its characteristic “chiek-ek-ek”. Martin explains that the call of the Lesser Kestrel is higher-pitched than that of the Common Kestrel.

He continues saying that “it is amazing how this small falcon reaches these latitudes in just 4-5 days at the end of February coming from some place in Nigeria, Cameroon or Senegal”. We confirm that the colony coexists with Spotless Starlings and doves. Meanwhile, in the surrounding areas it is possible to sight Black Kites, Booted Eagles and Short-toed Snake Eagles. In front of the square there is a wooden high observatory which serves for pedagogical purposes with the local students.

We step a few metres away from the square in order to get a better viewing angle. My guide assures me that, in the spring and summer evenings, the show is served with the two members of the Lesser Kestrel couple making an effort to support their brood. Their continuous comings and goings with insects and micromammals in their beak as the sun falls painting the sky orange is a unique image.

We follow a path until the Park of San Lázaro, accompanied among others by the songs of the stonechats. This green environment raises as an orchard in the city, offering sightings of all kinds of ducks, grebes, Little Ringed Plovers, Black-winged Stilts and Common and Green Sandpipers.

Martin admits that the rarest sightings take place here. The small sheet of water offers several surprises along the year. He also tells me that during winter Spotless Starlings gather in large roosts in parks similar to this one. After enjoying the dives of the Mallards and the grebes, we took a short walk to the two silos.

We should remember that the SPA is known for the Lesser Kestrel, and that preserving this species we advocate for the diversity of the common cultural and natural heritage. The locals call it mical, as it is known in Castúo (old Extremaduran language almost fallen into disuse nowadays). In fact, this is the name of the festival celebrated in the city during the first weekend of June, which is promoted among others by ADICOMT (the Association for the Integral Development of the Comarca Miajadas-Trujillo), in cooperation with DEMA (Defence and Study of the Environment).

We continued the walk entering the steep staircases of the city. Meanwhile, Martin reveals that, although all kinds of tourists go to his rural house, domestic tourists don’t usually require his services as an ornithological guide. During our conversation, we both advocated for a professional and high-quality ornithological tourism. A familiar rhythmical trumpeting interrupts our conversation.

Among the nocturnal birds that approach the city, the Eurasian Eagle-Owl stands out. “We don’t know where they sleep”, says Martin. But during their night rounds, the local police has seen them behind a corner devouring some dove on the ground. Moreover, they sometimes appear like a shadow over the highest antennas.

We go towards the castle and arrive to the beautiful Main Square, surrounding it under the colonnades. It is, without a doubt, one of the biggest and most beautiful squares I have ever seen. It is overlooked by the impressive statue of Pizarro, with a weight of 6500 kg.

We climb to an improvised viewpoint, a street with a small wall, from where almost all the White Stork nests can be seen. It’s quite a sight! 165 White Stork nests are found in the municipality of Trujillo, 44 of them in the town centre. In some of these nests we can hear the clickety-clack of their beaks (which is here known by the expression “to mash the garlic”) as a courtship ritual. In other nests we could see these white ladies’ first copulations of the year.

We arrived to the castle followed by the flights of redstarts and swallows, where the rupicolous species are the protagonists. Martin points out that Blue Rock Thrushes and Eurasian Crag Martins can be easily seen sometimes.

The old Arab fortress that gave its name to the city has seen it grow within its walls. It leaves room for the huge Main Square, where later on emerged the palaces erected by Pizarro (governor of Peru) and Francisco de Orellana (discoverer of the Amazon).

From the so called Viewpoint of the Nuns, with a White Stork flying above our heads, my guide shows me the surroundings of the city. When I ask him about the best destination in the Peninsula for ornithologists, he replies: “Certainly Trujillo. From here you can reach all the ecosystems in Extremadura.”

In the distance we see the snow-capped mountain range Sierra de Gredos, Monfragüe National Park, the pasturelands a bit nearer and the pseudosteppes. In the latter stand out the populations of Little Bustards and bustards that can be found in the SPA Llanos de Trujillo, on the road connecting the city with Cáceres. But in the vicinity, the highlight is the spheroidal weathering, which is an amalgam of granite rocks, ponds, streams, trees and bushes.

In this ecosystem close to the big city, mammals and reptiles attract the Golden Eagle, the Short-toed Snake Eagle, the Booted Eagle, the Common Buzzard, the Red Kite and the Black Kite. In addition, the cracks in the rocks give shelter to the Eurasian Eagle-Owl and the Little Owl. On top of all this, the Red-necked Nightjar, the Eurasian Stone-curlew and the Azure-winged Magpie can also be found in the area. We should not forget the bird life associated to its ponds and streams. There is also an important migratory stopover of passerines in autumn and of larks and pipits during winter.

The monumental town of Trujillo

We finally go down to the Main Square, the real hot point of the city, where Martin assures me that “in spring we can easily see Lesser Kestrels, Pallid and Common Swifts, Barn and Red-rumped Swallows, White Stork, Griffon and Cinereous Vultures, as well as Short-toed Snake Eagles, Booted Eagles and Black and Red Kites.” This is clearly enough to justify the astonished faces of the British tourists that I remembered seeing in this beautiful square.

It is really amazing to be sitting down in one of the terraces of the square and be able to fill our field notebook with these important sightings. After a small snack in one of the city’s taverns, we return to the car park talking and we said our farewells, hoping to meet again soon.

For those who want to get more information, I recommend you to read the article “Living together”, written by my host. I also recommend the website iberoaves.com, emphasising the PIOs (Points of Ornithological Interest) number 8 and 9. They respectively correspond to the bullring and the historic centre of Trujillo. You can also go to the Tourist Office in the Main Square of the city, where they have specific printed guides.

I don’t want to finish without thanking Martin Kelsey for the time he has employed in teaching me the possibilities of ornithological sightings that are offered in the city of Trujillo. I also want to thank its people for having the sensitivity and awareness to coexist with their birds and allow them to live among them. Thus opting for the possibility of sharing their cultural and natural patrimony, without putting aside the conveniences of a modern city. Thank you, Martin and the people of Trujillo. See you soon. 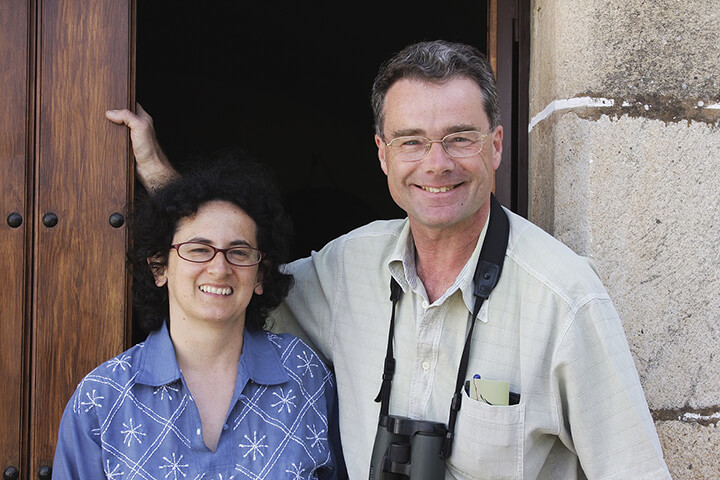 Martin Kelsey and his wife Claudia