Like every year, the Extremadura Birdwatching Fair (FIO 2015) will be held in an emblematic place for birdwatching professionals and amateurs in the south of Europe: Villareal de San Carlos, in the heart of the Monfragüe National Park.

During FIO 2015 there will be conferences, visits to Monfragüe National Park, workshops and all kind of activities for children, one of the strengths of FIO. We will also get to know the latest news in the world of nature tourism and photography from over 70 companies and organizations that will be present at the fair. 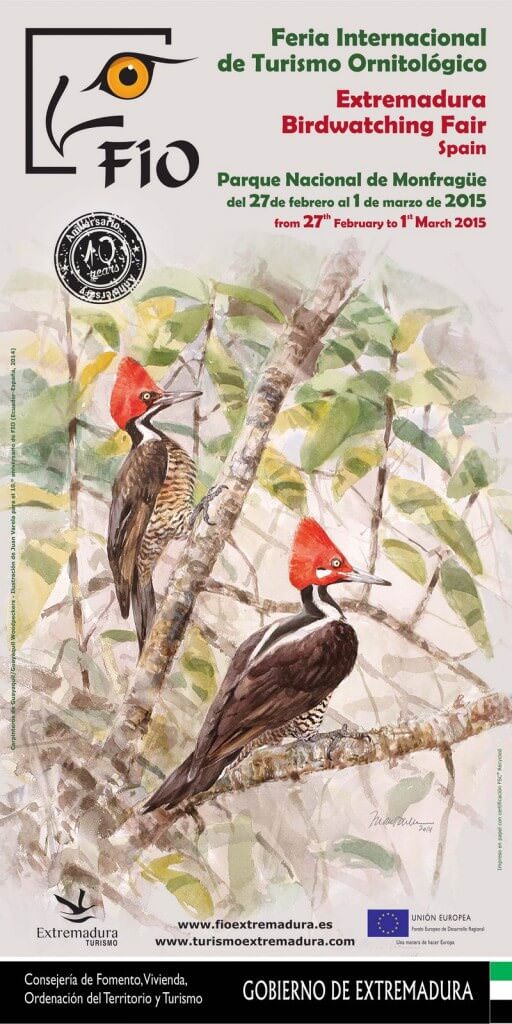 FIO 2015 will have an exhibitor zone divided in three areas. The first one will be devoted to the sale of optical and photography products. The second one will focus on the travel and tourism industry, where companies, public institutions and associations interested in the promotion of ornithological and nature tourism will be located. And, lastly, there will be an art and nature area where painters, sculptors and artists will display their work.

This year, FIO will also have three tents or zones for conferences and presentations. As in previous editions, there will be a general conference programme, with talks about difference topics related to ornithology, nature tourism and the information of conservation programmes, and a second conference programme specifically devoted to photography (FotoFIO).

As a novelty, this year there will be a third programme of presentations on the art of nature, where the artists present at FIO will show the everyday life of their creative work, and will interact with the people.

Where to stay and how to get to FIO

The city with the greatest hotel offer is Plasencia, a small monumental city which is well worth a visit. From there we can reach the FIO in a private vehicle in about 30 minutes.

FIO’s connection to the nearby towns by public transport is one of the outstanding points from previous editions. Unfortunately, unless we have a last-minute surprise, this year it won’t be possible either to attend FIO by public transport.

FotoFIO has confirmed the first conference programme. Here you can find the list of conferences and workshops that will be carried out. You can also download the programme in the following link: FOTOFIO 2015 Programme

During the FotoFIO sessions, FIO 2015 will raffle a Canon EOS 70D camera with an EF-S 18-55 IS STM lens. To participate in the raffle you just need to attend at least two talks during the morning session and one during the evening session on Saturday, 28 February 2015. The drawing will take place the following day at 13:00 at the FotoFIO tent.

Juan Varela, illustrator of the poster of FIO 2015, will open the cycle of talks on 27 February with his conference “The Art of Birds”. He will talk about the origins of bird illustration, how to draw moving birds and the importance of illustration in the information and conservation of the natural environment.

On 28 February we can attend lectures by Antoni Margalida, who will talk about the conservation of the Bearded Vulture in the Pyrenees; David Lindo, who will enlighten us with his birdwatching experiences in big cities throughout the world; Stephen Moss, who will give his conference “Birds and Wildlife Around the World. Behind the Scenes in the BBC Natural History Unit”, and Killian Mullarney, who will show us the changes registered in bird identification during the last forty years.

The presence of Jovan Andevski at FIO 2015 has also been confirmed. In his conference named “Reintroducing Vultures in Europe and the Importance of Spanish Collaboration”, he will talk about the work developed with the four European vulture species and about the role of Extremadura and other Spanish regions in this international project.

You can download the programme in the following link: Conferences Programme FIO2015

If you want to add an event to our calendar please fill in the form at the following link
Copyright of all trademarks, trade names, logos and images belong to their respective owners.